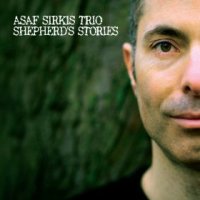 After six years together the trio's well-honed and distinctive sound remains fundamentally intact; skeletal compositional frames—melodic to the core and based around feathery guitar motifs—allow plenty of space for freedom. On previous AS Trio recordings there were notable cameos from drummer Gary Husband and harmonica player Patrick Bettison, and Sirkis' seems intent on further widening the trio's sonic palette with telling contributions from several guest musicians. Whether or not Sirkis is contemplating expanding the group's sound to quartet dimensions remains to be seen, but for the time being it remains essentially a trio, and a beguiling one at that.

Stavi's singing bass lines ferment quietly beneath Sirkis' propulsive play as "1801" skips breezily along. Spiliotopoulos—fast developing into one of the most immediately recognizable of guitarists—takes the first of two tremendously flowing solos either side of John Turville's Fender Rhodes excursion. Sirkis enjoys a brief whirl around his kit, whisking his cymbals almost like shakers. The bare bones structure of the slower, more ruminative "Eyes Tell" leaves Spiliotopoulos abundant room to carve out an extended solo, though faced with carte blanche, his almost meditative response conforms admirably to the needs of the music; virtuosity never trumps form and tone in Sirkis' trios.

Throughout, Sirkis' polyrhythms are central, but other than brief flurries, notably at either end of the energized "Dream Sister," his playing is effervescent without ever abandoning the groove. Spiliotopoulos takes another striking solo before Stavi restates the pretty head, crowned by Sirkis' final flourish. There's inner strength aplenty in the collective play and a confidence that negates the need for overtly muscular displays.

The music takes a pastoral turn with flautist Gareth Lockrane's intervention on the slower "Together." A lyrical delight, his extended freeform flight is deftly buoyed by the trio's supportive currents. The airy lyricism of title track is an album highlight—a jazzer's summer soundtrack—and "Two Part Melody" closes an absorbing set by balancing understated elegance and controlled passion.

Finely crafted and beautifully performed, Sirkis' trio seems to go from strength to strength. Like the best of stories, these will warrant listening to time and again.