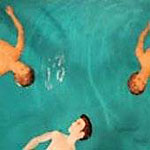 It is somewhat easy to be fooled, by the playfulness of Yuganaut's musicians, into thinking that Sharks is a flippant album. So, as rapidly as the thought occurs let it perish. The music on this album is deep as the ocean of sound from where it comes, and the musicians do a fine job of exploring the tones and textures that abound, as the music deliberately tumbles from their various instruments, to make a confluence of dramatic sound which, in turn, tells a sonic story all its own. When bassist Tom Abbs chugs with pedal point behind the chopped colorings of percussionist Geoff Mann—both joining Stephan Rush as he howls through the bent pipe of his trombone—the shuffle of "Breakthrough/Zhu" unfurls from its Zen-like mode into a bloom of naked color.

Similarly, on "Fade to Frenzy," a kind of ironically backsliding visual feast which sounds like the expressionistic world of Dr Cagliari—whose footage was being played backwards—still sounds as thogh the track is moving ever onward. Abbs is a virtuosic musician, extending from the entire family of stringed instruments to some brass and woodwinds. Here he is heard kicking up a storm on tuba and that haunting instrument of the Australian outback, the didgeridoo. Also on bass and on cello ("Lost in the Field" and other tracks) Abbs holds notes long and hard, plying them with overtones that intensify their color and make for a wonderfully vivid palette of sound.

Rush is more of an experimentalist. As a musician, he does not seem rooted in any instrument, although he seems drawn to all things keyboard—a fact borne out by his penchant for bringing toys to the set—but all is soon forgotten when Rush picks up his trombone and bleats plaintively behind Mann's brassy interlude on "Lost in the Field," Abbs' mournful cello notwithstanding.

Mann is the most colorful musician of the trio, his percussion work the glue that binds much of the Sharks' music.. His ability to awaken vast palettes of color—rolling easily on snare drum or dropping dramatically placed bombs on his bass drum while sniping away at the bevy of cymbals—is a thing of rare beauty. "See Saw," "Local Motion" and "Vger" are outstanding examples of his fine sense of rhythm and melody, enrobed in a rhythm all its own.

Although the album rocks excitingly from track to track, the crowning moments come on the ultimate track, "Again and Sweetly," a sonic gem of sweeping expanse. While sounding utterly new, the musicians manage to improvise around myriad familiar songs that appear and disappear throughout; an agglomeration of sound that makes Sharks memorable long after the music dies.