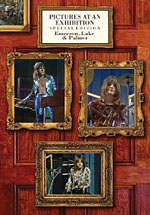 With the return of Emerson, Lake & Palmer at the recent High Voltage festival something of a resounding thud—preliminary YouTube videos portraying a bloated, embarrassing group where keyboardist Emerson's unfortunate hand problems caused the group to slow originally fast pieces to a near-funereal crawl, bassist Lake more pomp than circumstance, and only drummer Palmer really engaged, despite the by rote performances going on around him—it's a good thing that there have been a number of reissues to remind fans just how good this progressive rock group was in its heyday. The recent A Time And A Place (Shout! Factory, 2010), a generous four-CD box set of live material from the 1970s to the 1990s, provided a stunning cross- section of ELP at its hungry best and at its most ego-driven, self-important worst.

If at least 50% of A Time And A Place was an exciting ride down memory lane, then the latest (and, hopefully, last and most definitive) reissue of the 1972 concert film, Pictures At An Exhibition: Special Edition serves as, perhaps, the best video document of the group before its massive success led to massive egos and, ultimately, an implosion from which none of the members have truly recovered. Not that it matters; the money made during a time when progressive rock albums sold in the millions has assured the group of a lifetime's income.

Recorded on the cusp of 1971, Pictures At An Exhibition was not released on vinyl until after ELP's second studio release, Tarkus (Atlantic, 1971). More confusing still, the version heard and seen on DVD is not the one released on the original album; that version was recorded three months later, at Newcastle City Hall in England, March 26, 1971. The filmed version was recorded at the Lyceum in London on December 9, 1970 and, while it ultimately found its way to audio release with the two-disc Deluxe CD Edition of Pictures At An Exhibition (Sanctuary, 2008), it's in many ways the more exciting performance—warts, occasionally annoying psychedelic visual effects and all—as ELP proceeded to tear apart Modest Mussorgsky's classical epic and serve notice to a different kind of "long hair" community that its precious repertoire was no longer sacred.

Of course, keyboardist Keith Emerson had been turning classical repertoire inside out since his earlier days with The Nice, but with Lake and Palmer, he'd found a far more versatile trio with which to delve into some exciting keyboard unorthodoxy. It's no surprise—watching him spin, ride and throw knives into his organ on the tour de force "Rondo"—that Jimi Hendrix was, in fact, approached to turn ELP into HELP. The guitar may have been a far less unwieldy instrument for the late guitar icon than Emerson's hundreds-of-pounds (and more physically intimidating) organs, but the keyboardist managed to pull sounds out of them that, much as Hendrix did on guitar, nobody had done before, and few would do again.

As visceral as Emerson's showmanship-filled performance is throughout the DVD, it's the raw energy and flat-out hunger demonstrated by the group, as it works its way through the 40-minute titular epic, followed by two tracks from its just released debut, Emerson, Lake & Palmer (Atlantic, 1970)—much faster versions of Lake's "Take a Pebble" (complete with some maniacal clavinet work from Emerson after an impressive acoustic guitar solo and brief "Ballad of Blue") and even fiercer "Knife Edge." Palmer's solo during the finale, "Rondo"—complete with the Spinal Tap-inducing drum solo where, as he thunders away on bass drum, he removes his shirt and then smashes the two gongs behind him with reckless abandon—may be over the top, and Emerson's use of the Moog synthesizer ribbon controller to, well, rub his ass during Pictures At An Exhibition may be over the top, too. But one thing that's visible throughout the performance that was quick to disappear from ELP sets soon after: everyone was smiling, laughing and having fun. Despite going onto record a number of classic progressive rock albums, including Tarkus and Brain Salad Surgery (Manticore, 1973), ELP would begin to take itself far too seriously, and that's when it began a sharp decline that culminated in the over- indulgent Works (Manticore, 1977) and, even worse, albums like 1978's embarrassing Love Beach (Manticore) and only marginally better comeback, Black Moon (Atlantic, 1992).

But all that was ahead of them. Here, at the end of 1970, with its Isle of Wight performance already positioning it for greater fame and fortune, the members of Emerson, Lake & Palmer still had enough self-deprecation to not take themselves too seriously. And that makes Pictures At An Exhibition: Special Edition a refreshing counterpoint to its 2010 High Voltage appearance and, with the inclusion of nearly an hour of visual effects-free and, perhaps even rawer footage from Pop Shop 1971, the truly definitive ELP DVD. It may not have "Tarkus" and it may not have "Karn Evil 9," but it does have all the virtuosity and bombast, without the overbearing sense of self-importance that turned ELP from one of the 1970s' most exciting new groups into the definition of masturbatory excess and self-aggrandizement in only a few short years.