BY DAN MCCLENAGHAN
March 26, 2009
Sign in to view read count 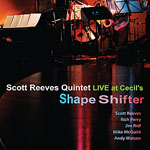 Scott Reeves' Shape Shifter could be called a standard live mainstream affair in that the tunes are, in part, vehicles for some stretching out by the soloists. But the sound slips out of the "standard" description, with its atmosphere of adventure and edgy energy, and an approach that more than hints at the avant-garde, in a way that perhaps Jackie McLean did on his '60s Blue Note recordings.

Better known for his trombone work, Reeves uses the alto flugelhorn here on seven of the tunes, for a richer, slightly deeper tone than the standard flugelhorn; and he goes with an alto valve trombone on two other selections, adding some unfamiliar timbres to the ensemble sound. His solos are spirited and spontaneous, as are those of his band mates.

Tenor saxophonist Rich Perry, Reeves' front line cohort, blows with brooding abandon—unpredictable and by turns fierce, supple, and unfettered, showing why he is one of Maria Schneider's favorite tenorists.

Pianist Jim Ridl leads a very malleable rhythm team—one that molds itself to every solo situation—and he gets a lot of space to strut his stuff, taking the music on some intricately audacious rides.

The all-original set opens with the title cut. It's been adapted for different ensembles by Reeves, but here it's full of turbulence and shifting time signatures in Ridl's solo slot. "The Alchemist," dedicated to Miles Davis, brightens the atmosphere, but maintains the forward momentum and urgency as it churns along with a catchy groove. "Without a Trace" opens wistfully, and features the two horns weaving their dark tones around each other.

"Pedachinho do Brasil" injects some buoyancy into the set, and "New Bamboo" takes the sound into Spanish territory reminiscent, in a pared-down way, of Miles Davis' Sketches of Spain (Columbia Records, 1960).

Shape Shifter is a fresh and inspired mainstream set, featuring a group of top-notch jazz men blowing freely on some vibrant original tunes.