By Hrayr Attarian
December 23, 2020
Sign in to view read count 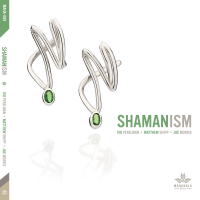 Tenor saxophonist Ivo Perelman's impressive oeuvre is marked by its creator's singular talent of balancing intellectual rigor and passionate abandon. Perelman's improvisation-heavy pieces are dynamic and intricately constructed, sometimes resembling tone poems in their evocative nature. His 2020 Shamanism consists of ten of these which are imbued with sublime spirituality.

Joining Perelman on this superlative release are long-time collaborator pianist Matthew Shipp, and guitarist Joe Morris. After Shipp's brief and haunting solo, "Prophets and Healers," the title track launches with an energetic three-way conversation built out of crisp note clusters and angular, jagged phrases. The stimulating repartee brims with a primal soulfulness which marks most of the album. Perelman's fiery honks and squawks meld with Shipp's percussive keys and Morris' resonant and reverberating lines, and construct a vibrant and ritualistic tune.

In contrast, "One Who Knows" is more contemplative and tinged with melancholy. Over Shipp's expectant, crashing chords Morris and Perelman engage in an otherworldly chant-like duet. More than just a dialogue, this is a kaleidoscopic and exalted union of three individual stream-of-consciousness monologues. It is a mystical and earthy melodic rite which, despite its uplifting and provocative dissonance, has its own inner lyricism. The conclusion is delightfully darker and more explorative. Morris contributes single chiming tones while Shipp makes his piano ominously thunder. Perelman's serpentine tenor meanders with this rhythmic structure.

There are moments of more "traditional" sounds. "Trance," for instance, opens with a blues-tinged collective extemporization which quickly becomes an unfettered and brilliant exchange of ideas. Perelman's yearning refrains simmer within the elegant and hypnotic guitar and piano duet. The finale is wistful and nocturnesque, and dovetails perfectly with another of Shipp's unaccompanied interludes, the eloquent and mellifluous "Altered States of Consciousness" .

Recorded in October of 2018, Shamanism is sacred music but not in the traditional sense of the word. It is a celebration of the transcendent in this world, a unifying element which is expressed through the trio's harmonic experimentations. The album is certainly challenging yet quite rewarding and inspirational, especially during these troubled times.