Shake Your Hips: The Excello Records Story by Randy Fox

For Ernie Young, it was simply a matter of 'that’s good enough.' Whatever the motivation, this willingness to release music that valued visceral appeal over conventional polish produced vibrant and transformative records.
—Randy Fox 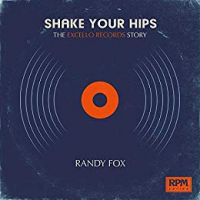 As almost a vital act of nature, three books that would make a tidy trilogy in any musical world, were recently released independently. These are: Blues From The Bayou: The Rhythms Of Baton Rouge (Pelican Publishing Press, 2018), Martin HawkinsSlim Harpo: Blues King Bee Of Baton Rouge (LSU Press, 2016), and the present Shake Your Hips: The Excello Records Story by music critic Randy Fox. Nashville's Excello Records has long existed in the historic shadow of Memphis' Sun Records. Both companies were founded by two disparate personalities in Ernie Young and Sam Phillips, respectively, each with the common intention of selling records and making money. Fox's slim history draws the distinction starkly while briskly accounting Excello's curious evolution.

Excello Records did not come first. That was the Black Gospel label, Nashboro Records, an anthology of which, I Heard the Angels Singing: Electrifying Black Gospel From the Nashboro Label, 1951-1983 (Tompkins Square, 2013) was curated by Mike McGonigal, the producer of two other essential collections, Fire In My Bones: Raw, Rare & Otherworldly African-American Gospel 1944-2007 (Tompkins Square, 2009) and This May Be My Last Time Singing -Raw African-American Gospel On 45rpm 1957-198 (Tompkins Square, 2011). But Ernie Young was in the 1940s what one would call an entrepreneur, beginning in the crogery business and gradually moving into a records store, mail-order record deliver, then a recording studio, then into the history books. Young was one to record things others had no interest in: raw, uncompromising, and often sloppy music. It was cheap to record and often returned great dividends.

After his success with Gospel Music and Nashboro Records, Young experimented with country music to only modest ends. Then he took to the blues and began to find a unique corner of the music map from which to build. After recording "Shy Guy" Douglas and Louis Campbell, Young finally lit a bottle rocket with Arthur Gunter with his composition "Baby, Let's Play House" recorded in December 1954...five months before Elvis Presley. Describing "Let's Play House," Fox waxes his most inspired:

"Loose, sloppy, and teetering on the edge of chaos, most [record] labels would never have considered releasing the recording. It perfectly embodied the "feel over technical quality" aesthetic that Sun Records head Sam Phillips would later bub "perfect imperfection." In Phillips' case, it was a deliberate artistic choice. For Ernie Young, it was simply a matter of "that's good enough." Whatever the motivation, this willingness to release music that valued visceral appeal over conventional polish produced vibrant and transformative records."

Ernie Young was about to turn the volume all the way up on the "vibrant and transformative" part of everything when he found the blues as far south as one could go...Louisiana. Young's first big act from the region was one Otis Verries Hicks, AKA "Lightnin' Slim." It was Young who hung this moniker on him, as well as subsequent acts, Leslie Johnson, AKA "Lazy Lester," Gabriel Perrodin, AKA "Guitar Gable" and Cornelius Green III, AKA "Lonesome Sundown." These men made up the center of Excello's blues output until the 1957 arrival of James Moore, AKA "Slim Harpo," appears and records "I'm A King Bee," setting a new trajectory for the label. Harpo was a solid producer for the label with songs including, "Raining in My Heart" (1961), "Harpo's Blues" (1964), and "Scratch My Back" (1966). This music brought Excello from regional to national recognition. It was his next song that jettisoned Excello into the international realm.

Harpo recorded "Shake Your Hips" in February 1966 for a June release. The song was produced by J.D. Miller as a follow-up to "Scratch My Back." Harpo's biographer Martin Hawkins (see above) describes the song as a "dance-instruction song [with a] fast-paced, hypnotic shoeshine beat." Hawkins notes contributions by Lazy Lester on percussion and Katie Webster on organ. The song sports an infectious drum rim figure that was to captivate the American imagination in a couple of ways. While the song had staying power for Harpo and Excello, it was made immortal by its inclusion on the Rolling Stones 2-LP set Exile on Main St.. Less acknowledged is the influence the song had on ZZ Top's "La Grange" from their 1973 recording Tres Hombres (London). Frank Beard's deft drumming telescopes the rhythmic figure employed by Lazy Lester to every classic rock station existing today.

Fox capably and with a taut precision, tells the story of this label, elevating it to its proper historic place, having its own chapter rather than be relegated to an endnote.