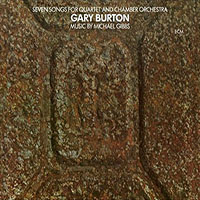 While there is still a handful of ECM titles from vibraphonist Gary Burton that remain unreleased on CD, perhaps the most unique of the bunch is Seven Songs for Quartet and Chamber Orchestra, originally issued by the German label in 1974 and the first of two collaborations with Zimbabwe-born, British-resident composer/pianist/trombonist Michael Gibbs. The similarly intriguing In the Public Interest (Polydor, 1974) is a more conventionally configured large ensemble with horns, reeds, piano, bass and drums; Seven Songs, on the other hand, remains the more unusual of the two, teaming Burton's quartet with members of Hamburg, Germany's NDR-Symphony Orchestra, performing music arranged, conducted and largely composed by Gibbs.

The result is an album unlike any other in Burton's recorded work, and that includes everything that's followed, right up to Guided Tour (Mack Avenue, 2013). Amidst Burton's lengthy discography (nearly sixty as a leader/co-leader and literally hundreds as a guest) his tenure with ECM—from his 1972 debut with Chick Corea on the classic Crystal Silence through to his 1987 swan song, Whiz Kids—remains some of the most experimental and compelling music of his career, with Seven Songs ranking alongside his pre-ECM classic collaboration with Carla Bley, A Genuine Tong Funeral (RCA, 1968), as his most forward-reaching and outré-thinking.

Seven Songs' overdue first-time CD release as part of ECM's seven-disc Re:solutions series, on CD—four for the first time and one previously only available for a limited time in Japan—vinyl and high resolution digital formats, only serves to emphasize just how unorthodox Burton had become by that time. A staggering instrumentalist with a reputation for solos of instant perfection and stunning construction, he may not have been a prolific writer, but he always chose his source material well. Some of Seven Songs' compositions, all by Gibbs with the exception of bassist Steve Swallow's "Arise, Her Eyes"—clearly a Burton favorite, already appearing on Crystal Silence, Throb (Atlantic, 1969) and Alone at Last (Atlantic, 1971)—were not new. Along with Burton's recording, "Throb" first appeared on Gibbs' Michael Gibbs (Deram, 1970), while "Three"—here, initially more subdued but ultimately turning more cinematically expansive, only to end in a long-held pedal tone over which Burton has the final say—premiered on Just Ahead (Polydor, 1972).

ADVERTISEMENT
Placed in the collaborative context of a quartet and chamber orchestra—Burton's group also including Swallow, perennially underappreciated guitarist Mick Goodrick and Ted Seibs, a little known drummer whose only recorded appearance of note appears to be this recording—Gibbs' arrangements go far beyond conventional "groups with strings" pairings and, instead, integrates the two seamlessly and with relentless invention and imagination.

The opening "Nocturne Vulgaire is more contemporary classicism than jazz—the entire album an early example of the label's aversion to stylistic pigeonholing. Acting as an abstruse fanfare, Burton finally enters two minutes in, at first with the orchestra, but gradually going a cappella, his dark-hued and spare segue into "Arise, Her Eyes" so subtle as to be almost imperceptible; by the time Swallow engages and the strings re-enter, acting largely as response to Burton's call, the bassist's familiar theme seems suddenly just there.

Elsewhere, the entire quartet integrates with the orchestra more fully. On the appropriately pulsing "Throb," Swallow and Seibs keep things subtle until Burton begins his solo. Still, even as it evolves, with Goodrick's bright-edged chordal support turning to contrapuntal linear foil for Burton when the orchestra reenters, the quartet's restraint is both admirable and exactly what's required. It's a quality that not only defines the quartet's work throughout the set, but the recording as a whole, even though there are plenty of notable solos from Burton, Swallow and Goodrick, while Seibs' delicate but ideal support makes his ultimate disappearance from the scene a real curiosity.

Burton would continue to source Gibbs' music on subsequent recordings—in particular on 1974's Ring (ECM), which includes two tunes ("Tunnel of Love" and "Unfinished Sympathy") that Gibbs would subsequently release under his own name on his superb 1975 recording, The Only Chrome Waterfall Orchestra (Bronze, 1975). But Seven Songs for Quartet and Chamber Orchestra remains a captivating anomaly in both Burton and Gibbs' careers, and its release as part of ECM's Re:solutions series only serves to highlight why.

Nocturne Vulgaire / Arise, Her Eyes; Throb; By Way of a Preface; Phases; The Rain Before It Falls; Three.