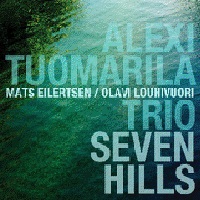 While not entirely rare, it is relatively uncommon to find relationships forged so strongly that the musicians find themselves working together in multiple contexts, where the names remain the same, only the leader changes. Finnish pianist Alexi Tuomarila and drummer Olavi Louhivuori have been working together in a variety of contexts for the past several years, most notably with Polish trumpeter Tomasz Stanko's quintet responsible for Dark Eyes (ECM, 2010), but together with Mats Eilertsen, they've not only worked together as the trio responsible for the pianist's Constellations (Jazzaway, 2006), they've also been at the core of the Norwegian bassist's SkyDive quintet, heard on its self-titled 2012 Hubro debut.

Reconvening under the pianist's leadership for his trio's long overdue second release, Seven Hills is, however, the first to receive international distribution from UK pianist Dave Stapleton's Edition Records. Continuing to build on the trio's intrinsic chemistry in a program of all-original music, Seven Hills positions Tuomarila as not just a pianist of watch-worthy merit, but a composer of equal value.

These days, when the words "European" and "piano trio" are put together in a sentence, comparisons are made, all too often, to that now defunct superstar of European piano trios, Esbjorn Svensson Trio (e.s.t.), whose career was cut short by the untimely death of its pianist in 2008. More often than not it's a lazy, superficial association so let's get one thing out of the way right now: Alexi Tuomarila Trio is not the next e.s.t., nor does it need to be. Tuomarila's early quartet records, from just after the turn of the millennium, were good enough to capture the ear of American pianist Brad Mehldau, and for good reason: unlike young pianists for whom Mehldau is an obvious touchstone, the distinctive Tuomarila's references are far more subsumed.

On "Prologue"—one of two tracks featuring guest guitarist (and album engineer) Andre Fernades, whose gently overdriven tone further expands the trio's soundscape with quirky, idiosyncratic inevitability—Tuomarila's motivic approach to soloing in the second half of this episodic, irregularly metered piece floats over a modal foundation. The pianist's gently majestic tack during the opening title track's folkloric intro gives way to a fiery solo over Eilertsen's robust 7/4 groove, further bolstered by Louhivuori's flexible mesh of light touch and frenetic polyrhythms, as the trio's mitochondrial connectivity makes the equally graceful "Jibeinia" a rubato tone poem of rare perfection that contrasts with the swinging free-bop of "Visitor Q."

None of these players has yet to reach 40—with Louhivuori the youngest at 31 and Tuomarila the oldest at 39—but they've already amassed such a broad collective resume that none of them have anything left to prove. Virtuosity may be a given—and there are plenty of glimpses to be found throughout Seven Hills—but it's equally clear that this trio's concerns are focus and collective interpretation rather than singular spotlights.

Tuomarila, Eilertsen and Louhivuori represent a different kind of piano trio to e.s.t.-aspirants—one that, based on the commanding, challenging and accessible Seven Hills, values real improvisational acumen reliant on motif-based, in-the-moment development rather than catchphrase predictability and access-driven familiarity.