By Eyal Hareuveni
May 8, 2013
Sign in to view read count
Japanese saxophonist Katsura Yamaychi is a unique musician in the Japanese experimental and avant-garde scene. He comes from the industrial town Beppu, far from the traditional creative center around and in the bigger cities of Japan. He picked up the saxophone in the early seventies, but it took until 2012 for Yamaychi to quit his regular job and dedicate himself fully to music.

Yamauchi has developed a highly original approach to his instrument, the alto saxophone. His playing investigates the instrument's nuanced sonic properties as a vehicle for transforming and mutating breaths and spare blows. His improvisations are often minimalist, but stress a melodic, emotional core and are easily accessible, all introducing a new way to experience music as pure, abstract sound. 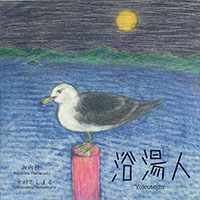 This recording was done in Yamauchi's hometown. It is a duet with Toshimaru Nakamura, a fellow pioneer of the Japanese Onkyo scene—a movement of musicians who have developed a new minimalist improvised approach to music, based on silence and tiny gestures. Nakamura's instrument or sound source, the no-input mixing board, is a sound board wired so it feeds back into its own input slot, producing a spectrum of white noises, feedback storms, high-pitched tones and other miscellaneous sounds that Nakamura loops and sculpts. The artwork was done by another member of the Onkyo movement, guitarist Taku Sigimoto.

The music is intense, despite its minimalist spirit. Nakamura manages to trigger sounds that challenge Yamauchi's saxophone flights, and occasionally force him to change the course of the improvisation or adapt his level of energy to the attack of noisy storms. There are a few moments where this meeting abandons the typical minimalist aesthetics and becomes, for a few seconds, an explosive, nervous free improvisation, before the dense noise dissolves, once again, into a changing, nuanced series of close-to-silence sonic gestures and explorations that maintain the tension of this shared sound sculpting. As abruptly as it began, it ends with spare, intense interaction.

This is another duet, this time with Danish guitarist, sound collage explorer and designer of sonic installments Martin Vognsen, who created the series of recordings State Changes According To A Wind (Jvtlandt, 2009). The music is, again, minimalist but this time serene, and both Yamauchi and Vognesen focus on exploring the common, distinct characters of their instruments.

Both recordings offer fascinating journeys within delicate forms of sound and time.