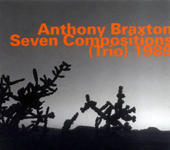 Responsible for some of the most esoteric and uncompromising music of the past four decades, multi-instrumentalist, composer, and bandleader Anthony Braxton is enjoying a resurgence in popularity, due in part to the critical acclaim afforded former students and current sidemen like Taylor Ho Bynum and Mary Halvorson.

Braxton's work is one of constant evolution; each passing decade bears new modes of expression. His Falling Water Musics were preceded by Ghost Trance Music in the nineties and the ground-breaking multiple logic structures of the eighties, expertly realized by his classic quartet of pianist Marilyn Crispell, bassist Mark Dresser, and drummer Gerry Hemingway.

Recorded in an especially fertile time period, Seven Compositions (Trio) 1989 documents a rare meeting with two avant-garde titans, Austrian bassist Adelhard Roidinger and British drummer Tony Oxley. In 1988 Braxton declared that the individual parts of any of his compositions could be played simultaneously, in any combination—a collage-oriented aesthetic known as multiple logics. The limited use of such developments with artists outside his regular circle makes this reissue a unique highlight in an impressive discography.

Drawing from a mix of seminal Braxton pieces, an Oxley original (written for Braxton), and a standard, the set is structured like a suite, with brief free improvisations used as bridges between the written material. Compressing seven tunes into three extended medleys, virtually seamless transitions blur the lines between the composed and the improvised.

An essential reissue from his voluminous discography, Seven Compositions (Trio) 1989 is a telling document of Braxton's versatility as an innovative composer and congenial collaborator.