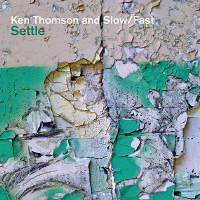 There are ways to get to know people really well, really quickly. Many of these fall under the general category: "challenge them, somehow." For a certain time of my life this meant: "go camping with them." Really. If you go camping with a group of people, you will find out a lot about them in a very brief time. Over the past decade or so, I've found that if you play really intense music with other musicians, you will also get to know them really quickly, and in much the same way. Or you could just go camping. Ken Thomson admits as much in the trailer for Settle, the latest album with his band Slow/Fast. Almost four years after the release of their debut It Would Be Easier If (Intuition Records, 2010), these guys clearly know each other really well. The near-telepathic ease with which Thomson and his partners-in-crime relate to each other in the context of Thomson's absolutely wicked compositions is readily palpable. The best thing about Settle, and really Thomson's whole concept, is that super-complicated music can be truly elevating and beautiful in an absolutely obvious, heart-on-the-sleeve way.

Thomson has heavy credentials in both the classical and jazz / improvised music worlds. He co-leads the punk-jazz band Gutbucket, plays alto saxophone and directs the Asphalt Orchestra (a world-class street band), and has worked with the contemporary classical ensemble Bang on a Can All-Stars since 2013. Thomson is also a prolific composer whose work spans many styles within contemporary classical, jazz and rock music. Those reference points, while useful, only partly parameterize what Slow/Fast is all about. Thomsen himself describes Slow/Fast as "long form, theatrical and often intense music for alto saxophone/bass clarinet with trumpet, guitar, bass, drums."

The title track is not what you'd expect. It's all elbows and knees; urgent tempo, angrily fuzzed guitar chords and darting horn lines. Things settle down into a surging 6/8 for Thomson's alto solo-his sound is light, fast and articulate-before the piece takes on a proggy math-rock feel. Fred Kennedy takes full advantage of an extended feature spot over a horn chorale towards the end. Russ Johnson, Nir Felder and Thomson (now on bass clarinet) imbue the insanely complex fugue-like theme of "We Are Not All In This Together" with a sense of kindness and warmth that, again, goes against the grain of the title. But it's bassist Adam Armstrong's attentive half-time pulse that really makes this piece pop into 3-D.

Kennedy crushes it again on "Welding for Freedom." Here, the young drummer plays two opposing lines, each with one hand: one matches Johnson's trumpet and the other parallels Thomson's alto. He continues playing the line, accompanied only by minimal guitar and bass chords until Thomson's fetching theme kicks in, followed by Johnson's fierce solo. Spring is no less engaging. Armstrong's meditative solo is followed by a rippling horn figure which, itself, is dramatically interrupted by Felder's metallic chords and Kennedy's crashing drums. A neo-classical feel pervades "Bend Towards Light," which is almost through-composed with the exception of Thomson's virtuosic bass clarinet solo. Yet, this piece is anything but cold or stiff. Kennedy's funky drums snake around a call-and-response figure that pits bass and bass clarinet against guitar and trumpet. "Coda" is, well, a brief coda. Like the rest of the album, it has a mysterious beauty to it.

Ken Thomson's music is unbelievably subtle, devilishly complicated, and it must be difficult to play. Yet, it's not difficult to listen to. There are several reasons for this. One is obvious: Thomson's band is populated with total badasses. The other is that playing music is a process. If you engage in that process over time with the same people-and they're the right people-the music gets more soulful, more heartfelt, more personal. On Settle, an album whose title itself implies a certain happy stability, Thomson's kaleidoscopic, multi-stylistic compositions are imbued with warmth and soul by an amazing ensemble. Settle is an album for the ages: truly fearless music made by people with a strong sense of commitment to their art.

Settle; We Are Not All In This Together; Welding for Freedom; Spring; Bend Towards Light; Coda.