Asphalt Orchestra is a radical new street band that brings ambitious processional music to the mobile masses. Created by the founders of the “relentlessly inventive” new music presenter Bang on a Can (Justin Davidson, NY Magazine), Asphalt Orchestra unleashes innovative music from concert halls, rock clubs and jazz basements and takes it to the streets.

Featured on the cover of The Philadelphia Inquirer as “not your mother’s marching band,” Asphalt Orchestra has also been praised in The Economist, New York Magazine, The New York Times, The Wall Street Journal, The Onion, and Time Out New York, as well as interviewed and showcased on WNYC’s “Soundcheck,” Philadelphia Weekly, PBS SundayArts, and Time Out New York’s “The Volume.”

Asphalt Orchestra’s debut album was released in August 2010 by Cantaloupe Music. The group is co-directed by Ken Thomson and Jessica Schmitz. Show less 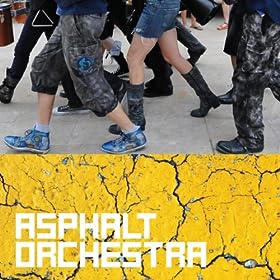 All About Jazz musician pages are maintained by musicians, publicists and trusted members like you. Interested? Tell us why you would like to improve the Asphalt Orchestra musician page.