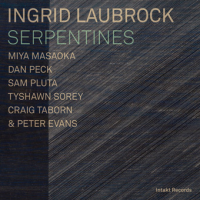 On the eponymous Serpentines, German-born, NYC-based saxophonist Ingrid Laubrock's unveils a new outfit featuring unconventional instrumentation, peopled by an all star cast. For this line up Laubrock takes her enigmatic charts for groups such as Anti-house and Ubatuba to another level, as improv jazz meets the classical avant-garde in pieces where mood and texture often trump individual pyrotechnics. It's fair to say that the assembled talents very much reside at the service of Laubrock's tightly drawn yet organic frameworks.

As such, the dominant feel is of an ensemble music, though it's rare for everyone to play at the same time. Laubrock's compositions unfurl step by step without imparting their structure. She uses her collected resources carefully but sparingly. That includes her own saxophone, as she is heard almost as much on glockenspiel. In fact it's not until the final title track that she stretches out on tenor saxophone, skittering above dense backing early on, before later expanding a ruminative questing line.

"Pothole Analytics Pt. 1" comprises pointillist sounds, which overlap, moving from shorter to longer idioms, creating a spacious introductory vibe to start proceedings. "Part 2" switches gears to become a tapestry of vibrant propulsive overlapping figures, with trilled motifs, particularly from the leader's soprano and Peter Evans' trumpet which sing out to forge a unifying signature, reminiscent of the recurrent fanfare in Anthony Braxton's "Composition 159." Those staccato exclamations serve a central role in "Chip In Brain" too, which in its mix of uneasy ambience and sustained tones, showcases Evans' marvellous keening, sighing circular breathed piccolo trumpet.

There's more opportunity for personalities to shine on the multi-sectioned "Squirrels," which you could imagine in the Anti-house band book. It begins with yet more mercurial interplay between Evans and Laubrock's soprano, a winning gambit revisited during the 15-minute duration. Space opens for a tumbling, flashing, glinting Craig Taborn piano excursion, with support from Dan Peck's harumphing tuba and Tyshawn Sorey's drum coloration. Later Miya Masaoka's koto comes to the fore, her bent inflections latterly accompanied by Sam Pluta's fizzing electronics.

As ever with Laubrock, her imagination leads places that others might not venture and with a such a team of luminaries, the realisations are never less than intriguing.