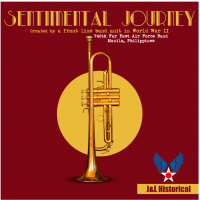 Picture this, if you will. You are in a war zone, in the Philippines. You are alone in the jungle. It is so hot that you are naked from the waist up. You are going on your third hour of trumpet practice. Only an occasional tropical bird mars the silence, scaring you half to death. You do have a Marine knife, but you are also 21 years old. Your name is Richard Burt, and you are a Private First Class in a war zone. When you are not practicing, you watch tracer fire some ways off while you play lead and jazz for the 746th Far East Army Air Force Band.

No. Not the Twilight Zone. All of this actually happened. And it is recorded in a way that sat neglected, literally in a basement, until Richard Burt's grandson, Jason, a teacher of history in California found them, when the Covid pandemic broke out and time was less of a constraint. Jason understood very well what the vinyl disks that he had recovered represented.

What you have a here is a remarkable sonic and visual record of a young musician's experience in World War II. Richard Burt, like other aspiring players, had led his own big band in places like Bryce Canyon National Park before the war broke out. Richard Burt was from Salt Lake City. He was an exact contemporary of Sgt. Doug Mettome, also of Salt Lake, who played trumpet in the 745th AAF Band, and was born in 1924. Unlike Mettome, Burt was never famous. Until now. And unlike Mettome, he lived to a ripe old age, 92, almost twice as long as his fellow horn man. Perhaps they knew of each other before the war broke out.

The Army Air Force Bands were believed "essential to troop morale." Listening to the 746th FEAF, you can, at the remove of 75 years, understand why. The recordings, first on wire, then transferred to vinyl, were entrusted to Richard Burt. His grandson, having recovered them, determined, wisely, that they comprised a primary source, a historical document that professionals could later use. He had them remastered and converted into .wav files, now available on download. Those with even a passing interest in popular culture and World War II will want to hear this. They music is as moving as it is beautiful.

Richard Burt played lead trumpet in the 746th, and he is the first thing you hear. A common reaction to an initial listen to Sentimenal Journey could well be: "This guy is good; how come I never heard of him?" And encounters with on "Trumpet Rhapsody" and "Moonlight in Vermont" could evoke the same response.

Don't expect studio quality recordings. These guys were practically in combat. There are false starts and re-starts, and all the rest. It may not be Glenn Miller, Larry Clinton, or Harry James. This was music to remind soldiers that they had something to live for.

After the war, which Richard Burt thankfully survived, he adjusted to civilian life. According to his grandson, Jason. "The trumpet was his lifelong companion, but in the 1950s he came to a crossroads about being a professional. After the war, he graduated from the trumpet program at Juilliard in 1953 and then went to Drake University for his BA and MA in Music. He was the lead trumpet in the Drake University Band, until he finished his masters degree. After that, he was in Des Moines with their symphony orchestra. However, he came to the conclusion that if he was going to be a professional musician, he was going to be missing out on family life. So he made the decision to get into teaching. He taught music in San Francisco public schools and in Sacramento the rest of his working life.

Richard Burt died in 2016. These recordings are a fitting legacy and include Burt's recorded account of his time in the FEAF, and some very valuable films of Burt and the outfit playing. This is an irreplaceable document for anyone interested in the Swing Era and what it was like to be young then.

Let's Begin...; Moonlight in Vermont; Trumpet Rhapsody; I'll Remember April; Perdido; Long Ago (And Far Away); Tea for Two; If You Are But a Dream; East of the Sun (West of the Moon); Moonglow; Sentimental Journey; An Oral History.