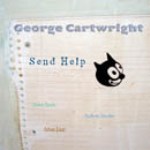 Saxophonist George Cartwright's prominence in the development of New York City's downtown scene, and lengthy affiliation with the cutting-edge progressive, jazz-rock unit Curlew, spawn an imprint of musical authenticity. Cartwright surges forward with this 2008, quartet-based effort recorded at The Cedar Cultural Center and The Walker Art Center's festival in Minneapolis, Minnesota, where the Mississippi-born artist takes up residence these days.

Raw, wild and often captivating, the quartet also injects a prominent fun-factor into the program. At times, the musicians slam the door on convention via wily free-jazz/rock vamps and gobs of expressionism. Cartwright and guitarist Andrew Broder tear it up with seething choruses built on stinging licks. But they alter the overall pitch and sense of the dynamic due to angular theme-building maneuvers and melodic undertones.

They generate more than a few firestorms with frenzied and semi-structured phrasings, as the soloists incorporate a touch of avant-rock amid garrulous improvisational movements. On "The March," Broder, using distortion techniques, and Cartwright terrorize the upper registers. Here, they embark upon a search and destroy mission. Then Broder vocalizes on Bob Dylan's "Oxford Town," and Cartwright's "I Want You To Promise," as the quartet occasionally surfaces as a lower decibel spinoff of Sonic Youth, complete with all the quirky deviations.

The band executes high-heat to complement the free-form components while transmitting a singular group-based identity. It's an album that radiates a fluent intersection of concepts. A good time was had by all during the process, which is a persuasive quality that remains a constant throughout.

So Ahab; POss OrN; The March; Send; Oxford Town; I Want You To Promise; Law Years.