By Jakob Baekgaard
October 6, 2013
Sign in to view read count 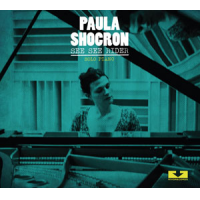 Argentinian pianist Paula Shocron is one of the most prominent artists on Justo Lo Prete's Rivorecords and has previously shown her worth on two superb trio albums: Our Delight (Rivorecords, 2011) and Serenade in Blue (Rivorecords, 2012). See See Rider offers a welcome chance to hear Shocron in a solo setting.

From the opening chords of "Sweet Lorraine," Shocron's muscular lyricism is immediately on display. As she improvises around the bittersweet melody, every phrase is carved out in stone, but at the same time, there's also an effortless swinging ambiance and sense of historical depth. A story is told with conviction.

Whether diving into a standard like Cole Porter's "What Is This Thing Called Love?" or the gospel and blues of the traditional "Deep River," Shocron plays with respect for tradition without repeating it. There's a fresh, raw emotionality in her playing and her interpretations glow with the joy of musical discoveries.

Like other releases on Rivorecords, See See Rider follows a familiar concept, which mixes standards, bop classics and traditional blues and gospel. In other words, timeless music and melodies. The danger of playing this repertoire is the risk of anonymity, but Shocron comes out with her own voice. These classics become her melodies and are played without filter. It's direct musical communication without a hint of pretension.