By John Sharpe
February 6, 2021
Sign in to view read count 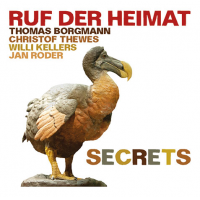 Originally an outfit exploring perspectives on free jazz from either side of the Berlin Wall, Ruf Der Heimat continues to thrive on Secrets, only its fourth release over the near three decades since its 1992 birth. Leader and reedman Thomas Borgmann remains at the helm beside his longtime accomplice drummer Willi Kellers but, in the meantime, the former East German contingent of saxophonist Ernst-Ludwig Petrowsky and bassist Christoph Winckel has departed to be replaced in the current incarnation by trombonist Christoph Thewes and bassist Jan Roder.

Recorded during a November 2019 live date in south-west Germany, the 74-minute album showcases the band's stock-in-trade of flowing spontaneous invention which isn't afraid to look melody in the eye. That boldness stems from Borgmann in particular, who leavens his expressive post-Ayler saxophone with an infectious lyricism.

The four tracks exude a natural breathing flex, speaking to the benefits of fleeting digression, especially the first two pieces which each clock in around the half hour mark. Although solo space arrives, the default skews towards group interaction. Simple extemporized themes blossom in on-the-fly arrangements which show sufficient internal chemistry to renew and refresh, at the same time giving cogency to the larger whole.

That is not to say that any of this could function at anywhere near the same level without the attentive axis forged by Kellers and Roder, who instantly recalibrate to even the most subtle change in dynamics, while both stoking the fires and offering contrapuntal comment. They impart a potent rhythmic sensibility which furnishes another key component of the mix, not in strict metric terms, but rather in the loping relaxed swing which can verge on a groove at times.

Roder is well-versed in this sort of boundary-straddling stunt, both from his role in units such as Die Enttäuschung, which made Monks Casino (Intakt, 2005) with pianist Alexander von Schlippenbach, but also his appearance as part of another of Borgmann's outlets, Keys & Screws, who made the excellent Some More Jazz (NoBusiness, 2020).

The expansive cuts typically dial back towards the end, but if they were tighter then you might lose that warm inclusive feel, and lovely moments like the off-handedly Latin underpinning of the marriage of Thewes' cavorting trombone and Borgmann's plaintive harmonica which closes "Birds And A Cow."

Secrets Of A Bird's Mind; Birds And A Cow; Malatune; Cowbirds.