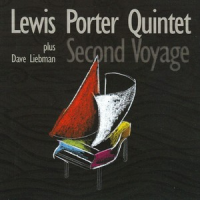 Lewis Porter has a well-earned reputation as one of jazz's most meticulous and thoughtful scholars. He is the founder and director of the Masters Program in Jazz History and Research at Rutgers University, not to mention the author of John Coltrane: His Life and Music (Michigan, 1998), which many consider the definitive Coltrane biography. But part of what makes Porter's academic work so valuable is his applied knowledge of the music, gained through a parallel career as a pianist (and former saxophonist). Indeed, Porter has described himself as "a street musician with a Ph.D."

In June of 2000 Porter took a break from the books and entered the studio with a strong supporting cast to record Second Voyage, his debut CD. The great Dave Liebman guests on two selections, on soprano and tenor respectively. Elsewhere, the highly-underrated Dan Faulk handles reeds and comes across beautifully. Guitarist Ken Wessel appears as a fluid solo voice and an alternate comping instrument as well. Bassist Harvie S (formerly Swartz) and drummer Marcus Baylor (now a member of Yellowjackets) provide a solid yet supple rhythmic backbone. As for Porter, he is a dexterous, engaging player, extremely well-versed in bebop but quite able to push beyond it, leading the band through a wide range of compositional and improvisational settings.

The title track leads off at a laid-back, straight-eighth 6/4 tempo, moving through an uplifting series of four-bar harmonic patterns. "Three Blues" follows, distinguished by three contrasting lines that set up each of the solos -one of which is Liebman's (on soprano). The horns lay out while Porter takes his time on a trio reading of "Night and Day." Faulk then rejoins on soprano for a faithful yet probing rendition of Coltrane's "Central Park West," no doubt dear to Porter's heart. "Lester Young Samba," the shortest yet most melodically infectious track, is immediately followed by the longest, "Irish Mantra," which winds down with a revealing, unaccompanied piano break. Liebman then returns on tenor for the knotty, free-leaning "Olivier" (a Messiaen tribute). "Last April," Porter's inventive line on "I'll Remember April,," starts the initial descent and features an especially brilliant Faulk on tenor. Finally, the spacious solo piano of "Karen's Meditation" and the flowing Latin groove of "Again and Again" bring us in for a soft but by no means uneventful landing.