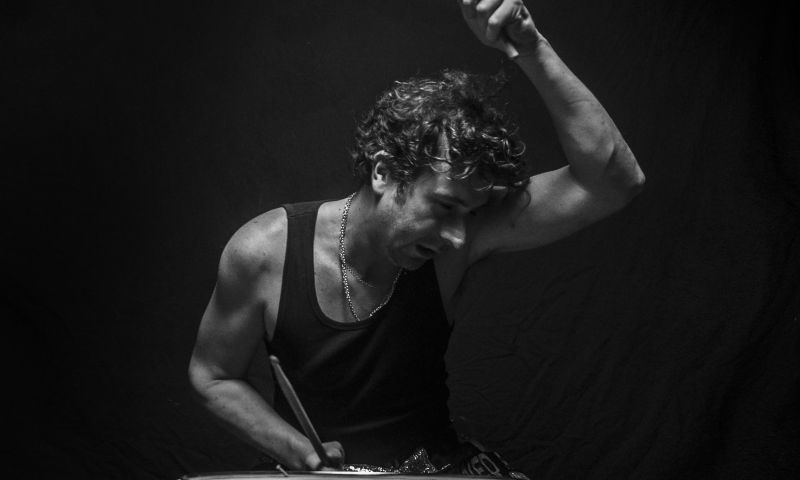 By PHILLIP WOOLEVER
January 12, 2018
Sign in to view read count
Composer and drummer Sean Noonan is an explorer, charting many edges of the compositional frontier. The term unique does not quite cover the range of his thoughtful, abstract approach to musical narrative.

In some of his projects, like "Memorable Sticks," melodic structures deriving from a progressive or alternative jazz base feature prominently. The opus of prog fusion a'la King Crimson or Todd Rundgren's Utopia also comes to mind.

Noonan's latest release Man No Longer Me is guaranteed to raise some consciousness as well as some eyebrows. "Eat My Makeup," probably the album's most mainstream track, demonstrates both the solid, standard backbeat Noonan can lay down and how imaginative his untypically complicated lyrics can be. The album includes selections from Noonan's evolving "Zappanation" project, with live dates being planned.

Throughout an unconventional catalogue, Noonan employs many a clever turn of phrase to reach absurdly absorbing truths. Like his musical vision, Noonan's perspective on a variety of related subjects is forthright, honest and engaging.

All About Jazz: What initially brought you to including jazz elements in your music?

Sean Noonan: I am a proud product of public education and in my hometown of Brockton, Massachusetts we had a great instrumental music program and in this competitive environment the jazz band was the most difficult band to get into. It was there jazz was introduced to me and from then I studied from a great array of private teachers in Boston like Bob Gullotti to Bob Moses who took me into the far outer fringes of traditional jazz and world and free forms. Since then this upbringing remains part of my voice on the drums but as a composer my respects come from a completely different place, since I learned to compose out of the classical music world.

AAJ: What is your approach and philosophy toward jazz drumming rhythms?

SN: There is no constant structured approach with any rhythmic concept except that it is a backbone of all I hear, feel and play. I really never set my mind to use preconceived rhythmic language, or try to not force it. I have these constant thirsts to realize all kinds of polyrhythms or additive rhythms in my drumming and compositions. I venture everywhere to find rhythm in the universe and really think of what I am doing on the drum set it is new jazz drumming in this century since I am absorbing electronic music, world, new music, hip hop, math and prog rock. Right now I am working on a concept to compose music from mapping out my live performances on the kit. Some previous personal developments can be found on the albums A Gambler's Hand and In the Ring where I composed concepts for string quartet, treating it as an extension of a drummer's four limbs to develop music. I plan to use that concept in a lot of my future projects.

AAJ: Any impressions, feelings or preferences regarding particular jazz drummers or percussionists? Is there anyone who influenced you one way or another?

SN: I was blessed to have the teachers I mentioned (previously) to guide me. Also, everyone has heard all the greats out there, but my impressions of rhythm makers that mesmerize me are often names or faces or concerts or recordings I don't recollect. I am really bad with remembering every album name or drummer out there (but) I will never forget the sound from those experiences. I am often in my own musical bubble but some profound recollections range from hearing a ten-year old boy in Bamako Mali leading a club band like how Michael Jackson would, to music that shows the evolution of rhythm from a drum machine back to a player piano and field recordings. When I have those listening experiences they are injected into my soul and mind. Later, when I dream, I can hear them. Sometimes they become part of me and later might magically become part of an improvisation.

AAJ: Is composing lyrics more of a poetic process or a musical process for you?

SN: I don't believe poetry is actually a musical form, where lyrics abide to do a whole different system that you don't find in poetry. Not always in my music am I dealing with lyrics, but often more rhythmic use of words. Outside that I am collecting story lines that come from different places from folk to urban lore to my own personal tales. On the drums and in my compositions, I love to explore concepts using spoken word rhythms that mirror a drummer or a drummer who drums lyrics. That interplay is an important part of my musical concept. I try to speak like a drummer, and to drum the rhythmic text on the drum set.

AAJ: You once stated you're not a fan of Ginger Baker or Phil Collins, please elaborate on that. Is there any difference between them? Any impressions from Baker's recordings with African musicians?

SN: Well, I really don't believe in speaking badly about other people and don't know how you got that info about me since this must of slipped out from a stream of sub-consciousness. The real reason I don't like Baker is since he fucked my best friend's girlfriend. Baker was doing heroin with her and was a jerk to my friend and didn't let him hang out. It seems he has a lot of dark energy there so I stay far away, besides his arrogant comments about how much better he can play jazz than other people, which I think is just him reflecting his insecurities. I choose to leave it there and I encourage you to check out some of my music with African musicians instead, like on Boxing Dreams. There is a difference with Collins of course, and here it is just a matter of musical taste that makes my stomach sick.

SN: I am hoping to find out if we will premiere my rock opera in Germany in 2018 sometime soon but please keep tuned. And with that said, Zappanation was a special opportunity to compose for a 13-piece ensemble ranging from Sardinian choir, string quartet and full rock band. This was performed in Italy in 2016. In the studio the performance was too long for CD, so I decided to include four tracks on Man No Longer Me and plan to release the other half of it in the future. I was fortunate to be able to express my music in a more performance based, theatrical approach where I could apply my experiences working as a stage drummer doing musical reviews. It was a big undertaking to compose. Now I am revising to clarify the story line, since I wrote all of it over the course of a few months.

AAJ: Zappa worked with some incredible stick men like Vinnie Colaiuta and Terry Bozzio. What would your approach be to drumming with Zappa? Did you ever see him in concert?

SN: If I played with Zappa my approach to drumming would fit more with his earlier bands like Mothers of Invention since they have that organic jazz-rock style I really love. Unfortunately, I never saw him and to be honest I never checked him out when I was younger nor was it really what I was initially exposed to. The whole Zappa thing really started from people coming up after my live gigs saying they were reminded so much of Zappa or asking if I was influenced by him. I think they might have said that because my music demands a strong stage presence and bit of putting on a show, or because it brought out a bit of nostalgia. In the beginning I was a little bit annoyed when people said that, since at that time I had literally never checked any of his stuff out. So it wasn't until a commission to write the Zappanation rock opera, which is actually an ionization of Edgard Varese and Zappa, that I truly started to get his spirit. I soon realized he was so prolific, and did so much diverse music, that I am still checking it all out today.

AAJ: Who would the other three musicians be if you could play in a "dream" jazz quartet with living players?

SN: I would love to play in a quartet with William Parker on bass, Anthony Braxton on reeds and Craig Taborn.