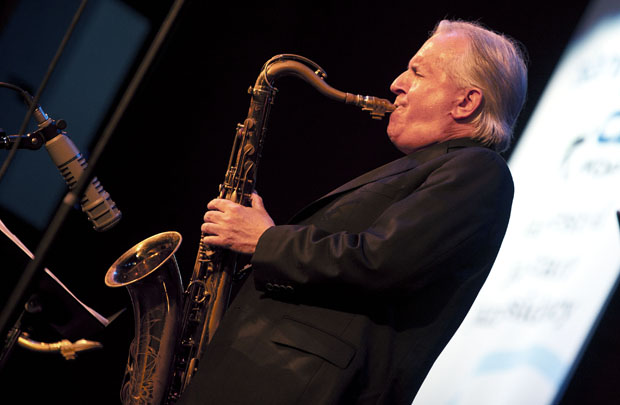 As a part of the 40th anniversary of the Stanford Jazz Festival, Scott Hamilton took to the stage to a nearly sold out crowd for a powerful evening of jazz. Hamilton is one of the most highly respected and sought after tenor saxophonists in the world. The Larry Vuckovich Trio formed the core players for the event—pianist Larry Vuckovich, bassist Jeff Chambers, and drummer Chuck McPherson. Hamilton also brought featured guests including vocalist Kenny Washington - Vocals,young trumpeter Erik Jekabson, saxophonist Charlie McCarthy and percussionist John Santos. Each added their own distinctive flavor to the night's music.

The evening opened with Hamilton playing solo, gently taking the audience into two sets. Roughly two-thirds of the way into his solo, Vuckovich joined in and the two smoothly worked their way toward the finish and into the bulk of the night's concert. Jekabson joined the quartet on the third tune, not only blowing a mean trumpet here, but popping out smoothly and easily until he began hitting some incredibly high sustained notes, only to come running down the scale to finish off. With Santos on bongos and Hamilton caressing his notes like only a master can, there came a point where the saxophonist and Jekabson traded licks back and forth, providing the feeling of rushing towards the piece's end. When the last note was played, the audience not only gave a rousing applause; they cheered as well. It was a remarkable tune, executed by two seasoned masters as well some younger players like Jekabson and McPherson. At the break end of the first set, before the break, the audience gave them all a standing ovation.

Throughout the concert, it was clear that Hamilton and Jekabson were having fun dancing off of each other's improvisational forays across numerous tunes. McCarthy took to the stage for the second set, playing a delicate and highly sophisticated sax duet with Hamilton. McCarthy added a smooth ease to Hamilton's sometimes raspy edge, the exchange between them feeling as though they had been playing together for decades. It was clear proof that professionals such as these have grown to instinctively know what another player is going to do even before he does it.

The second set distinguished itself apart from the first set, not only because Washington took the stage but because virtually everything these incredible musicians did in the first set was multiplied a hundred fold in terms of where they took the music. Third song of the set made clear to all just how much fun Vuckovich was having during his solo, as his fingers flew across the black and whites. McPherson wailed on his skins during his solo, but contrasted vividly with his delicate touch on tom toms and cymbals.

The timing to bring on master vocalist Washington could not have been better, as his singing and scatting increased the passion and the sophistication of the concert and took it in a fresh direction. Washington led off the final number of the set with a round of scat that brought McCarthy and Hamilton in, doing that back-and-forth talk that great saxophonists do. Jekabson slipped into the piece with his muted trumpet and, as the power of the number developed, Chambers played a long, sustained solo the likes of which would challenge any other living bassist. McPherson picked it up and turned down the power of the piece as he delicately played his cymbals, until Santos soloed on his hand drums, leading the rest of the band into the night's finale.

The quality and variety of tunes played that night handed the appreciative audience a golden platter of some of the most soulful jazz that has filled the Dinkelspiel Auditorium in a long, long while. Sweaty but fulfilled, the band took its bows and walked off the stage to an uproarious audience that cheered, that applauded and that called for more. These masters returned to the stage and wrapped the evening, giving the audience a final farewell and leaving them hungry for even more.