By Dave Nathan
January 1, 2002
Sign in to view read count 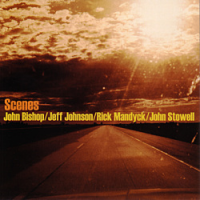 With this Origin label release, the fruitful Northwest music scene continues to manifest high caliber jazz music sessions. This time it's the 8 year-old trio of John Bishop, Jeff Johnson and Rick Mandyck enhanced by guitarist John Stowell, for more than an hour of modern and progressive jazz. The play list is certainly an attractive one combining three originals with standard and jazz classics. Stowell. who worked with David Friesen for seven years, plays a clean lined guitar avoiding smears, blurs and growls and other abrasive aural traumas. His individual work on such cuts as "Blues on the Corner" shows he understands that solos are not just a bunch of notes, but that it's necessary to take a breath every now and then to let what's been playing have its effect. Stowell also does equally as well in a subordinate role. His comping underneath Mandyck's strong sax on "New Beginnings" burnishes the exciting sax solo. This original composition by the saxophonist provides for sufficient flexibility to allow him and Stowell to exchange new ideas about the major theme as they go through the tune. Another appealing point about this album is the diversity in arrangements. The group tries to make each track different so neither they nor the listeners become complacent. The bass/drum opening, for example, on Wayne Shorter's "Nefertiti" sets the framework for a lengthy exposition of this tune which helped fire the Miles Davis Quintet. In contrast, the group's approach to the oft played "Yesterdays" is more relaxed and contemplative as they address several variations of the tune's major theme. This album is modern, progressive jazz that engages the hearer from the outset without resorting to devices that would make the music unapproachable. Recommended.