The trio of guitarist John Stowell, bassist Jeff Johnson, and drummer John Bishop were first heard together on the 2001 release "Scenes" along with tenor saxophonist Rick Mandyck. Now returning as a trio under the name Scenes, they continue their exploration of free flowing yet highly melodic ensemble playing. Their latest album, "Along The Way" is a set of all original music. Touching on burning swing with "Studio City," haunting ballads with "Haiku" and "I Wish," and new country with "When Jasper Grows Up," the trio sculpts an uncompromising yet very accessible soundtrack.

The group Scenes has released seven excellent albums over two decades of recording together, beginning with their eponymous debut (Origin Records, 2001). All of those are studio efforts. The group's 2022 outing, Variable Clouds is a first for Scenes--their first album recorded live in front of an audience, in 2021 at the Earshot Jazz Festival.

In 2000, master guitarist John Stowell met with the 8 year-old Seattle trio of drummer John Bishop, bassist Jeff Johnson & saxophonist Rick Mandyck to record the 2001 release "Scenes." Soon after, Mandyck retired his tenor for health reasons and the remaining trio carried on, recording five more albums and performing widely over these 20 years. Mandyck's participation on this session marks the first time he has entered the studio on tenor since that 2000 recording, creating a moving moment for the others as he brings along not only his singular musical voice, but five compositions to inspire the core trio, opening up new pathways of conversation. Whether traversing the tumbling landscape of Mandyck's "The Reckoning," or sliding into Claudine Francois' beautifully hypnotic title track, the eclectic quartet glides toward a known destination while discovering the course in the moment. There is history to guide their impulse, intuition to find their way. "Considerably absorbing...Dynamically astute and rhythmically sensitive, this is very satisfying music..." —Cadence Magazine.
6
Article: Profile

The storyline for the Pacific Northwest-based band Scenes began in 1983, when drummer John Bishop and guitarist John Stowell began playing together in Portland and Seattle. When bassist Jeff Johnson arrived in Seattle in 1989, he began playing a weekly trio gig with Bishop and tenor saxophonist Rick Mandyck. Stowell, already frequently traveling abroad to play ... 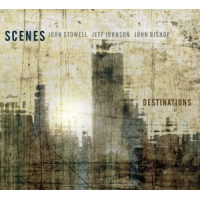 There are wondrous stories to be found in everything the eye can see, the ear can hear, and the imagination can dream up. Scenes--the trio of guitarist John Stowell, bassist Jeff Johnson, and drummer John Bishop--has been readily and steadily making that point for more than fifteen years, harnessing natural beauty and concocting chimerical designs that ...