By GLENN ASTARITA
September 14, 2016
Sign in to view read count 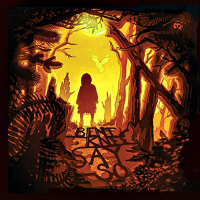 Even though I haven't had an opportunity to check out this Boston-based ensemble's first two albums, I've heard the buzz within prog rock circles about the positive output of its multifaceted soundscapes, variable modes of execution and exhilarating live performances. Moreover, Say So, marks the band's debut outing for Cuneiform Records.

Led by vocalist Courtney Swain who vaults though octaves with the greatest of ease, the program amounts to a seamless convergence through highly artistic rock sensibilities amid theatrical segments, choral backdrops and even some doom metal parts due to guitarist Ben Levin's slamming crunch chords. Needless to state, there's a lot to digest here. It's not your prototypical rock session, which can be a good thing in most instances, as some may consider that Bent Knee may fill a void within these genres.

The album benefits from a very detailed soundstage and pristine audio processes, looming as a prerequisite for the band's sound and comprehensive scope of attack. There are numerous intricacies on a per-track basis that include drifting soundscapes, celestial developments and trippy ambient sequences. But each piece contains a kaleidoscopic underpinning along with a continuum of unanticipated deviations and refined keys and violin framed interludes. With contrasting somber movements and a weighty musical mass, Swain's chameleonic vocals often help accelerate the ensemble's momentum.

The artists project a sense of the visual on a recurring basis. On "Eve," Swain pours her heart atop sweeping ethereal patterns, yet punctuates a stately, Native American type motif on the tuneful "The Things You Like," featuring choruses from the huge cast of background singers, tempered by subtle moments often rendered by violinist Chris Baum's temperate staccato lines and Levitt's nimble harmonics. Otherwise, the musicians inject a great deal of timbre into their game plan.

"Nakami" conveys a translucent alliance of power and beauty, complete with an infatuating hook. Although the final track "Good Girl," commences as a bluesy ballad, enamored by an attractive melody line that opens up into a full blown overture. Here and throughout, the musicians' cast an all-embracing magical mystery tour of sorts with a distinctly personalized group-centric focus.