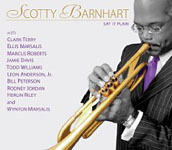 After many years as part of the supporting cast, Scotty Barnhart is taking that step forward as lead actor. The trumpeter mixes old and new, in varying styles, with his debut, Say It Plain.

Barnhart spent 17 years as featured trumpet soloist with the Count Basie Orchestra and was also part of the Marcus Roberts Quintet. A graduate of Florida A&M University, he is now professor of jazz trumpet at Florida State University.

Say It Plain is an evenly divided set of originals and standards. Fellow trumpeters Clark Terry and Wynton Marsalis appear on selected tracks. The core group consists of Barnhart, Rodney Jordan on bass, Leon Anderson Jr. on drums and Todd Williams on saxophones. The rest of the ensemble features a variable lineup of pianists, including Roberts and Ellis Marsalis, guitarist Rick Lollar and a few others.

The title song is a playful piece that begins with Barnhart using a mildly muted effect. As the piece picks up, the trumpet grinds and growls through some sassy phrases. Lollar and pianist Bill Peterson follow with solos, while Anderson checks in some emphatic pings on the cymbals during the latter. In one sequence, it appears for a moment that Jordan has the solo, backed only by Peterson with Herlin Riley on tambourine, but as it picks up, Riley is leading.

"Haley's Passage," dedicated to author Alex Haley, features Barnhart on the flumpet, a hybrid of a flugelhorn and a trumpet. The melody is a harmonious duet between Barnhart and Williams, who plays soprano sax on this selection. Lollar contributes a brief solo, but it's Barnhart who carries most of the piece, with Lindsey Sarjeant taking over piano duties.

"Jnana," honoring trumpeter Dave Monette, is one of several energetic pieces. Roberts carries the piano duty. Anderson and Jordan are engaging in the background. Barnhart cranks up the juice during his lead, setting up a dazzling solo by Roberts, matched in intensity by the bass and drums. Williams contributes a tenor sax solo.

The styles of Say It Plain vary from swing to blues to Latin and even a bit of Dixieland. In addition to his original songs—one co-written with Terry—Barnhart delivers first-rate renditions of such classics as John Coltrane's "Giant Steps" and Dizzy Gillespie's "Con Alma." With a solid band and stellar guests, this is a debut that whets the appetite for more from Barnhart.