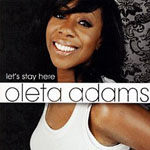 In 1990, Oleta Adams released her debut album, Circle of One (Fontana), which featured her cover of Brenda Russell's "Get Here." She followed that up with the terrific, but underrated Evolution (Fontana, 1993) which featured a slicker, adult contemporary sound.

With a voice as big as all outdoors and more chops than a butcher Adams couldn't sing a song badly if she tried, but like her contemporaries Anita Baker and Patti Austin, she needs good material to draw from and her last album All the Love (Monarch, 2001) didn't have nearly enough to draw upon.

On Let's Stay Here, Adams doesn't leave her fate in the hands of others. Eight out of the ten songs are written by her; she plays piano and keyboards, and produces most of the album. This is an artist asserting complete control over her own career.

The problem is: will the intended audience be able to find this album? Adams makes music for grown-ups, but radio, the internet and concert venues are geared toward kids, not their parents.

While stronger than All the Love, Adams hasn't totally solved the problem of finding material worthy of her ample talent. It's a good move to sing her own songs, but the attempt at being topical in "Another Day Has Come and Gone" doesn't deliver, and few too many tracks are pleasant and professional without being particularly memorable.

The backup singers on "Picture You the Way That I Do" demonstrate nice interplay with Adams. "We Can't Stay Here" documents a couple's faltering last ditch efforts to save their relationship. Adams' version of Billie Holiday's "Don't Explain" is cool, classy and sultry.

"Yesterday" is another Adams original, not the Lennon/McCartney song—which is too bad, because Adams has demonstrated in the past with "Don't Let the Sun Go Down On Me" and "Many Rivers to Cross" that she can be dazzling when covering other artists.

The energetic gospel/soul workout "Act of Forgiveness" interjects some adrenalin into Let's Stay Here, but almost seems like it wandered in from a different session. After an eight year hiatus, it's great to find Adams in fine voice, and hopefully Let's Stay Here heralds her return to recording and performing regularly. Sooner or later Oleta Adams is going to deliver on her enormous potential, but for now she remains a great vocalist who has yet to make a truly great album.

Feelin' Good, Picture You the Way That I Do, We Can't Stay Here, No Way to Love Me; Another Day Has Come and Gone, Best That I Can Do, Let's Stay Here, Don't Explain, Yesterday, Act of Forgiveness.