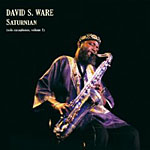 In a 2003 interview, reed player David S. Ware talked about "a revelation which changed his musical life." It occurred while performing in Boston, where he suddenly could "witness" himself playing the music. When that happened, he cultivated the epiphany as meaning that he, alone, is the channel for the music which comes out of his horn. Nothing could be embodied more clearly than in Saturnian, a solo release recorded live at the Abrons Art Center in New York City on October 15 of 2009; a concert celebrating his return to his art after a long-in-coming kidney transplant and, more importantly, after fifty years of playing.

If knowing the sound of a musical line was ever in question, Ware provides the answers in this solo performance. Using three different reed instruments on three tracks, he also brings timbre into play. Those who know Ware for the blustery character of his tenor, working with his well-known groups, will not find that on Saturinan.

All three tracks are named for moons of Saturn. In the opening "Methone," Ware plays the saxello, a peculiar shaped soprano sax whose bell arches up and away from the body of the horn. The horn sounds far more nasal and Oriental than the familiar, straight version of the soprano. Ware takes the music where it leads him, with simple phrases that include runs and slurs, jumping up the scale and never repeating. He hits high pitches more than once; creating harmonic movement one note after the other and often constructing seemingly complex curlicues. At the close, he plays an ostinato as if it were a series of choruses, bringing him to the final arrangement of phrases.

"Pallene" bears some similarity to "Methone" in its disposition of phrasing, but on the stritch—an alto saxophone without the curve—the tonality is a bit deeper than the saxello. It could be said that the change in tonality grounds Ware, but that is a view in the aftermath of listening. The physical properties of the instrument give Ware the parameters within which he can play, with filigrees that are heavier than those in "Methone." The motion moves more slowly from one phrase to another, but not without dedication or inherent musicality.

Ware's tenor work comes in the closing "Anthe," with tonality deeper than that of the stritch. His lines bears weight, with fewer notes than the other tracks—and yet, the extremes are great as Ware takes the tenor to its highest peak and stays for more than a moment, eventually dropping back into its lowest tones. He never settles; he keeps moving, finding the extremes repeatedly.

Ware's expression is without ornament. His music travels in one direction: the temporal direction, right into the David S. Ware improvisational pocket.