By JOHN KELMAN
February 2, 2005
Sign in to view read count 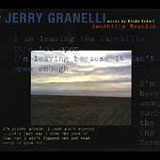 In these days of rap-informed everything , the combination of spoken word and jazz is nothing new. Mike Ladd's Negrophilia - The Album (Thirsty Ear, '05), for example, seamlessly blends poetry with electronica-inflected free ideas. But rap has a certain cadence that differs from the less direct rhythms associated with the spoken word of, say, the beat poets of the '50s and '60s.

Drummer Jerry Granelli has been around long enough to remember those times and, in fact, collaborated in the '70s with writers including Allan Ginsberg and William Burroughs. With Sandhills Reunion Granelli and a new ensemble of past musical collaborators mix a variety of musical approaches with the reflections, imaginings and internal dialogues of actor/playwright/singer Rinde Eckert. The recording highlights the strengths of both, but is best experienced by taking in everything as a whole.

Much as films like Koyanisqaatsi have created new ways of experiencing music and the visual medium, Sandhills Reunion aims to find a new confluence of music and the spoken word. Eckert's musings take the form of personal experience ("Our Particular Tragedy"), reflection ("Your Voice"), intriguing narrative ("Nolan"), and even a Q&A with Billy the Kid on the day of his hanging ("Twenty Questions for an Outlaw"). At times allegorical and enigmatic, at other times crystal clear, Eckert's writing is captivating, loosely tied together through the Sandhills of Nebraska and the character of Billy the Kid.

Granelli solicits music from each member of the septet, and the result is a diversity of styles that includes the ambient/new music sensibility of "River of Glass," the Middle Eastern inflections of "Our Particular Tragedy," the light funk of "Your Voice," the raunchy blues of "Just Angels," the Americana of "Last Light," and the unabashed folk of "Spun Like a Spur." If this were an album of strictly instrumental music, as well-conceived and executed as it is, it might appear to lack focus and direction. But when combined with Eckert's poetry, the result is a unified work that takes the listener on a vivid journey down a number of paths that, in the end, ultimately seem to converge at the same place.

Eckert's readings are for the most part very matter-of-fact, with little in the way of drama or hyperbole, leaving it to Granelli's ensemble to inject the emotional context. Granelli is the director of what is almost an audio film in its vivid visual evocation, but he receives a lot of support. Clarinetist Francois Houle, bass clarinetist Jeff Reilly, baritone saxophonist David Mott, cellist Christoph Both, guitarist Christian K'gel, and bassist J. Anthony Granelli come together in various combinations to create a soundtrack, an aural travelogue that takes Eckert's writing and orchestrates it into an even broader context.

Sandhills Reunion works because both musical and poetic elements are strong unto themselves, and when placed together they successfully elevate each other beyond their respective boundaries.

Like a Ghost in the Grass; Our Particular Tragedy; 20 Questions for an Outlaw; Nolan; River of Glass; Your Voice; Just Angels; Last Light; Little White Suit; Never to See You; Smart Women; Spun Like a Spur