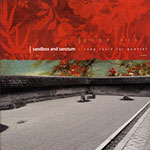 Guitarist Gene Ess came to jazz via country rock and blues clubs frequented by US service personnel in Okinawa, classical music studies at George Mason University, and performance studies at Berklee before he hit the New York scene. Upon arriving there, he established key contacts with Matthew Garrison, son of bassist Jimmy; Rashied Ali, one of John Coltrane's last drummers; and Ravi Coltrane, John's son. Ess's early jazz listening centered around recordings by John Coltrane. As he revealed in a 2001 interview for All About Jazz, it was early on in New York that he began to formulate his ambition of writing his own music. Sandbox and Sanctum, Ess's third album under his own name, successfully shows how far he has come in realizing his goal. The restless ghost of John Coltrane could be said to inspire the music he presents here.

The title of the recording calls to mind two famous works of British Romantic poetry, William Blake's Songs of Innocence and Experience and William Wordsworth's "Intimations of Immortality From Recollections of Early Childhood, which begins with the line, "The Child is father of the Man. Ess's young son, Ryo, is featured at age two in a photograph on the album, as is Gene Ess himself at the same age, and Ess dedicated the album to Ryo.

But Sandbox and Sanctum is no romanticized, idyllic portrait of childhood. Just as happy children can have bad dreams and be afraid of a dark side they only imagine—the stuff of fairy tales—Ess brilliantly mixes compositional colors throughout the album. He has achieved a delicate tonal balance that unites this "song cycle for quartet, as Ess subtitles the album, perhaps echoing John Coltrane's A Love Supreme, also for quartet.

While a listener might think of Pat Metheny or John Abercrombie or even Grant Green now and then, Ess here really sounds like no one else on guitar: he is his own man. In his solos, his front line playing with the very fine tenor and soprano saxophonist Donny McCaslin (next time: more soprano!), and his comping, Ess is a full-fledged master of taste and touch. His solos are model essays of eloquence and compression. His very special moments occur on acoustic guitar on "Ballad for a Swordsman and a very electric rock-ish "Sun Matsuri.

Just as John Coltrane thrived on a dynamic collaboration with drummer Elvin Jones (as well as Rashied Ali), Ess and drummer Gene Jackson share an intense chemistry on this album. Check out "Baptisma Pyros and "Ask the Guru for evidence of their bond. Jackson manages some fine calypso rhythms in the album's closer, "Kerama Processional as well.

Gene Ess was personally involved in every production detail for Sandbox and Sanctum, and the labor of the love behind the album truly shows. Along with bassist Harvie S (this "S stands for solid and supple), these musicians play like they've been together as a band for a long time. May they continue to play together for a good long time.

Visit Gene Ess on the web.