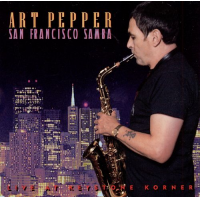 San Francisco Samba contains four performances previously unrecorded in the Art Pepper discography. According to Todd Selbert's discography included in the confessional Straight Life: The Story of Art Pepper," Pepper had not previously recorded with this collection of musicians (with the exception of Cables). Three of the four pieces included on this disc are well-known in the Pepper repertoire, with the blues "Art Meets Mr. Beautiful" the sole exception.

This recording captures Art Pepper at the Keystone Korner in San Francisco on August 8 and 9, 1977. Chronologically, these performances were recorded about a week after the superb Village Vanguard sessions (July 28-30) [The Complete Village Vanguard Sessions, Contemporary 9CCD-4417-2, 1995] and about a month before Pepper recorded the soundtrack to the Clint Eastwood movie The Gauntlet with Jon Faddis (on September 13 and 15). To broaden this chronology, Pepper had only returned to recording as a leader in early 1975 following prison terms and chemical dependence rehabilitation that consumed most of the '60s and early '70s.

Between 1975 and these performances, Pepper grappled with a heavy John Coltrane influence whose remnants are apparent on San Francisco Samba. Most particularly on the up-tempo blues "Art Meets Mr. Beautiful" (Pepper's euphemism for George Cables) does Pepper modulate his typically lyrical phrases with Coltrane-esque vertical screams and wails. The second permeating influence was Pepper's association with Cal Tjader for a Japanese tour in April of 1977 (captured on Tokyo Debut, Galaxy GDC-4201-2, 1995). Tjader's Latin sway shows up in Kenny Dorham's "Blue Bossa" and Pepper's own "Samba Mom-Mom." Both tunes are funky and loose in execution with Pepper at his most playful, spinning elegantly chosen phrases and logically constructed solos around a core of dense pathos.

This is the period of Art Pepper's comeback: His music has yet to reach the emotional intensity that it would in the '80s before his death, but we find it well on its way. This is no better illustrated that on this disc's only ballad, "Here's That Rainy Day." Here Pepper is just starting his fractured ballad style of the 80s, where his playing is punctuated with starts, stops, and florid fast phrasing.

The rhythm section, led by the exquisite George Cables, is competent. Pepper seems to be slightly more relaxed here with Eddie Marshall as drummer compared to his Village Vanguard performances with Elvin Jones the week previous. Michael Formanek provides a solid ground support.

There is nothing new here. Pepper's playing is firmly in what could be considered his rococo period, that time of tonal transition between the dry ice cool of the late 50s and early 60s and the primal scream therapy of the late '70s and early '80s. The novelty here is that these seem to be new recordings that have not surfaced until now. Any previously unheard Pepper performances should be of interest, and these are no exception. Listening to them prompted me to give The Complete Village Vanguard Sessions a spin, and I'm glad I did. Art Pepper is the most important alto saxophonist (arguably, along with Johnny Hodges) after Charlie Parker, who was not directly influenced by that master. Anything new by him is worth hearing.