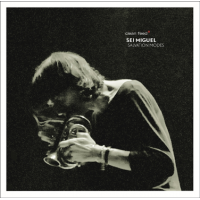 A delicacy pervades this music from start to finish. Sei Miguel's Salvation Modes is flush with silence, interludes, the sounds of musical instruments that made you love them in the first place. The disc is spread over three extended pieces: the first piece, "Preludio e Cruz De Sala," including trumpeter Miguel with guitarist Pedro Gomes, trombonist Fala Mariam and percussionist Cesar Burago; the second, entitled "Fermata," with Miguel also on finger cymbals along with Andre Concalves on hammond manipulation, Margarida Garcia on twin (whatever that is) and Burago again on percussion but also radio; and "Cantata Mussurana" (with inclusive dates for the work of 1996 to 2012), featuring the leader once again on trumpet as he directs a tentet that includes a viola, a singer, bass guitar, drums, alto saxophones, bandoneons, modulated feedback and various percussion instruments. This three-part suite of sorts of all composed and arranged music by Miguel refrains from any in-your-face shock mannerisms, and instead combines engaging musicality with radical notions of form, the improvisations spontaneous but mannered.

Subtly subversive, Salvation Modes seems to be all about extending the conversation about instruments, improvisation and listenability to include multiple musical personalities, all under the direction of Mr. Miguel. For example, the 18- minute "Cantata Mussurana" appears to hover around Pedro Lourenco's funky bass (hiccups to Herbie Hancock's "Chameleon") as singer Kimi Djabate introduces a quiet, resonant, moaning voice. Miguel's trumpet bleats unobtrusively, followed by a clambake of percussion, Ernesto Rodriguez's viola twitches and more recited and sung words from Djabate. It's fermentation but without an obvious outlet. We don't know where we are going with this music, and yet it keeps us listening, varied in its approach, thoroughly musical all the while outlandish in demeanor. Similarly, the 27-minute "Preludio e Cruz De Sala" uses tempered instrumentation in non- tempered ways, with dynamic ranges that can be ear- splitting when the music isn't approaching a kind of modest solemnity. Trombonist Mariam's blaring horn at times creates a kind of electrocution that extends the possibility of that normally brassy tonal instrument alongside Burago's plucky, spacious percussion. The music on "Preludio" also includes Mariam playing it relatively straight with ghostly guitar musings from Gomes before the leader pops in for some more parched, almost mid-'70s Miles Davis-like tones, tones that are stretched out in a way that gives new meaning to the phrase musical space.

Like many instrument-driven projects (vocals included) both in and outside of jazz and improvised music, Salvation Modes can become like an alternate-universe soul music, the sounds of each voice kindred spirits. Perhaps, hence the title.