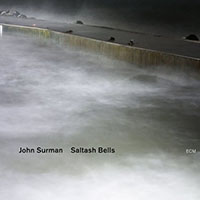 There's no denying the "the sound of surprise" of group recordings; working solo, however, provides its own possibilities, despite meaning different things to different people. Pianist Keith Jarrett views it as a means for pulling form from the ether: one man, one piano, in real time. Multi-instrumentalist Stephan Micus, on the other hand, considers it a blank slate where it's one man but a multitude of instruments layered one upon the other, through multi-tracking, over the course of days, months...even years. Reed player John Surman has been creating one-man orchestral works since Westering Home (Island, 1972), but it's been his subsequent 33-year tenure with ECM where he's created a larger body of work that has included an additional half dozen solo recordings, beginning with his label debut, 1979's Upon Reflection.

Credits for Surman's previous one-man efforts cited them taking place during the course of a month; Saltash Bells, in contrast, was recorded over just two days in 2009 and one more in 2011. Surman adds tenor saxophone, and alto and contrabass clarinets to his core arsenal of soprano and baritone saxophones, bass clarinet and synthesizers...even harmonica, for the first time, on the epic "Sailing Westwards," gently layered so seamlessly with his synth patterns as to feel like a unified voice.

Loops, synthesizer sequences and multi-tracked horns suggest preconception, but in Surman's sphere these remain a means of using improvisation to create further improvisational contexts, whether it's building foundations or soaring over them, as he does towards the end of "Sailing Westwards," his soprano responding to the various layers that combine to shape this hypnotic closer of cinematic proportions.

Saltash Bells is not all layered constructs, however. The pensive "Glass Flower" features Surman a capella on bass clarinet, while baritone saxophone is the sole voice on "Ælfwin." Elsewhere, "Triachordum" is a trio baritone piece, Surman's improvisational voice adding the shifting vertical harmony to two horns separated by fifths throughout, even as he fashions melodies in the moment over the course of nearly four minutes. Surman's soprano saxophone on "Dark Reflections" seems to be on a course that orbits around a series of shifting lines more buried in the mix, while baritone and soprano saxophones evoke both lyricism and unrelenting pulse on "The Crooked Inn."

Saltash Bells is an intended reference to Surman's birthplace in Tavistock, a scenic location on the River Tavy, which runs through West Devon to the English Channel. Sounds of church bells and seagulls echoing over the landscape are but two touchstones that imbue the charmingly pastoral Saltash Bells, an album that confirms you can take the man out of the place but you can't take the place out of the man.