By HRAYR ATTARIAN
August 16, 2012
Sign in to view read count 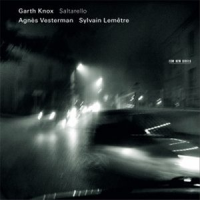 Violist Garth Knox is certainly not a jazzman in the traditional sense of the word. Nevertheless, he is well adept at musical improvisation. He has worked with the revolutionary Ensemble Intercontemporain with its cross-genre experimentation, as well as pioneers of free jazz such as Joëlle Léandre, George Lewis and Steve Lacy.

Knox's "Fuga Libre," on the sublime Saltarello, amply demonstrates these skills in improvisation. This solo viola piece flirts with the avant-garde while keeping the classical canon firmly in view. Contemplative and melancholic at times, yet eerily quiet at others, Knox brings this unique fugue to a satisfying conclusion with his expert handling of the strings.

Over the past fifteen years, Knox has also developed into one of the premier interpreters of idiosyncratic 20th century composers including Iannis Xenakis, Hans Werner Henze, and Alfred Schnittke. On this album he deftly interprets Kaija Saariaho's "Vent Nocturne," which was written expressly for Knox. Saariaho's characteristic lush essence and enigmatic ambience is often the result of mixing electronics with live instruments and they come across on this impressionistic concerto.

The concerto's first movement, "Sombres Miroirs," mimics the chilling blow of wind at night, with snippets of sweet melody while angst travels on its currents. Knox's bowing on the second, "Soupirs de L'Obscur," is quieter than the first, but with no less anguish as it shrouds itself in mysticism.

In between the two parts of "Vent Nocturne," is an interlude of renaissance lutist, John Dowland's signature song, "Flow My Tears." French cellist and frequent collaborator, Agnes Vesterman joins Knox and his viola d'amore for a duet. Her transcendent sound and mercurial style match Knox's perfectly and the gentle echo of notes creates a surreal yet calming sanctuary.

Knox started a revival of period instruments, particularly viola d'amore, for both contemporary interpretation of classics and modern music. In addition to the main strings, this particular chordophone has a warm, sweet, sympathetic tone. On the folk tune, "Black Brittany," the distinct voice of viola d'amore conjures idyllic scenes while Vesterman's glissandos bring in a romantic urban modernity.

Knox also plays the medieval fiddle on a medley of two early musical compositions: a sacred one by Christian mystic, Hildegard von Bingen, and a secular one by medieval French poet, Guillaume de Machaut. Sylvain Lemêtre joins him on percussion, bringing an Andalousian earthiness to the otherwise ethereal spirituality of the originals.

Classically trained Lemêtre has an adventurous spirit that comes across on the three traditional dances that pepper the Italian structure with hints of Celtic and Levantine.

With Saltarello, Garth Knox has created a work that spans a thousand years and brings together the heritage of multiple cultures. In a way, it is a career defining moment as he distills all his interests and influences into a single disc.