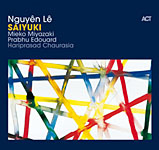 He's not the first guitarist to explore the nexus of east and west—the legendary John McLaughlin is, at the very least, the first well-known six-stringer to do so—but, over the past couple decades, Nguyên Lê has been finding his own junctures. McLaughlin may have dug deep into the place where western harmony and Indian linearity meet, but Lê has set his sights even more expansively. Of Vietnamese descent, he's explored the music of his own heritage on Tales from Vietnam (ACT, 1996) and the confluence of that birthright with the Middle East and contemporary technology on Homescapes (ACT, 2006). On Saiyuki, he cuts a broad swath across two continents, from his Parisian home to Japan, with stops along the way in India and Vietnam.

Accompanied by Japanese kotoist Mieko Miyazaki and tablaist/percussionist Prabhu Edouard, Lê delivers a joyful program that's also one of his most organic albums in recent years. Yes, he's an electric guitarist and, as ever, his tonal choices are impeccable, but the use of technology is so well-integrated that it's easy to imagine this as a live performance. A truly egalitarian offering, the music is co-composed by all three players, who dip into the wellsprings of their individual cultures to create a program that's transcendent in its beauty and cultural cross-pollination, supporting the old adage of music as the international language.

Edouard's konnakol (vocal percussion) opens the joyously upbeat "Sweet Ganesh," a linear composition possessing a knotty but memorable melody that's akin to McLaughlin's Shakti and Remember Shakti groups, but Lê's heavily sustaining, compressed, and overdriven tone is distanced from McLaughlin's, and his microtonal bends are even more directly linked to the eastern tradition. Miyazaki's harp-like koto also adds a richer texture to the trio; everyone solos, but it all feels compositional, even Edouard's lengthy konnakol/tabla solo towards the song's end.

"Autumn Wind" is even more meditational; like the breeze of its title, the song gradually takes on forward motion, its gentle spirituality the result of Lê's winding harmonics and guest bansuri flautist Hariprasad Chaurasia's rich, unhurried lines. Chaurasia was a member of the first Remember Shakti incarnation, first meeting McLaughlin during the sessions for percussionist Zakir Hussain's seminal Making Music (ECM, 1987), and so his participation on three of Saiyuki's ten tracks is especially auspicious.

Elsewhere, "Mina Zuki," with Lê's bluesy acoustic guitar, manages to link Japan with the Mississippi Delta, though its rich arrangement also possesses just a hint of the American Midwest. "Azur" may be, as Lê puts it, "a jazz composition," but the trio's arrangement takes it deep into the orient, with Miyazaki's the largely dominant and definitive voice.

Despite complexity under the covers, the music of Saiyuki—seemingly diametrically opposed to its translation, "Journey to the West"—soothes with its innate lyricism and elegant optimism. With his distinctive approach to exploring and integrating music from around the globe, Lê continues to impress with his fine playing, astute collaborative choices, and personal vision.