BY DAVID RICKERT
October 17, 2009
Sign in to view read count 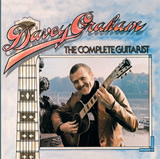 Davey Graham never found a style of guitar playing that he didn't want to master. In fact, he was such a perfectionist that he recorded infrequently, preferring not to commit any tunes to wax until he had thoroughly explored all the avenues that each tune had to offer. From ragas to ragtime, Graham did it all, but frustratingly a lot of his work is difficult to find.

The Complete Guitarist, originally released in 1977 and now available on CD for the first time, is one of the Socttish guitarist's most satisfying works and a compelling array of acoustic guitar styles. Graham kicks things off with a medley of a traditional Irish air and jig, followed by a catchy original, a hymn, a baroque tune and....well, you get the idea.

Graham, though, is not an archivist or a preservationist, but loves these songs because they're a lot of fun to play and hear. Although many of these songs have been around for years (in some cases for centuries) and are played true to their roots, everything is as fresh as paint even today. Graham has assembled what amounts to a mix tape of traditional tunes from a variety of sources, yet the real feat is that he makes a seamless listening experience out of them. And what's more, while some guitar records can wear thin, Graham's record constantly grabs the attention with an enchanting melody or novel arrangement.

The only problem with The Complete Guitarist may be an over reliance on the DADGAD tuning that was a popular way to render the modal harmonies from the isles (many are familiar with it from Jimmy Page's acoustic numbers on the Led Zeppelin records). It's a cool sound, but a little goes a long way, and really we don't need five pieces that all sound pretty much alike (although "Frieze Britches" is a great name.) As an added bonus, for those who play guitar (surely part of the core audience for this release) six of the tunes have tab versions available as part of the CD.

No matter. Graham recorded some oddball records in his day, but The Complete Guitarist is one of his most straightforward and rewarding dates. Long before the new age bug hit, there was a lot of great acoustic music that was being made. Graham was one of those guys worth a listen.