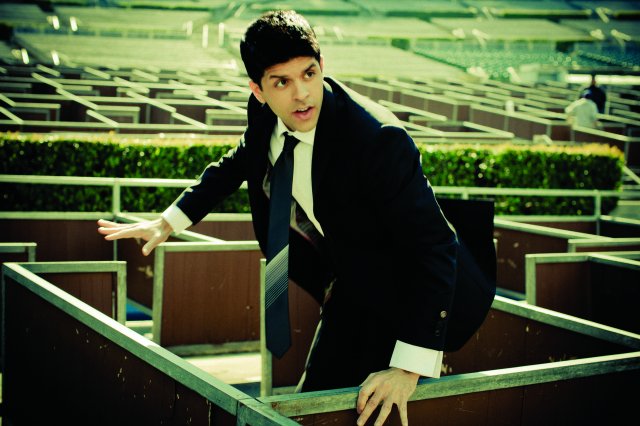 By Gregg Akkerman
May 22, 2012
Sign in to view read count
Even with a few albums behind him, vocalist Sachal Vasandani is still considered a member of the younger generation of jazz musicians. What sets him apart from many of his contemporaries or predecessors is his keen intellectualism when it comes to his musicality and career aspirations. He does not just get by with a gorgeous tone and attractive stage presence and assume the details will take care of themselves. This is a man that still hones his craft and pursues a level of personal communication with his listeners.

His recent album is Hi-Fly and Vasandani explained how it differs from his previous releases: "This album was another chance for me to continue to share with an audience music that means something to me personally but with this go-around it's more of a celebration." On the earlier CDs, Vasandani was working through some personal issues of sadness but now he wants his audience to hear the message, "Hey, we made it baby."

One aspect of Hi-Fly that brings out the celebratory nature is the singer's use of falsetto—a technique many male vocalists are reticent to use. Vasandani described the intention behind the high notes on "Babe's Blues" when he said, "Well, I've always used my falsetto, especially when I improvise, but I wanted to write something specific for it, kind of a feature for my voice. Those high A's are just part of having fun on the album. I tried to keep it light and yet soar a bit."

Another way Hi-Fly differs is the inclusion on two tracks of vocalist-legend Jon Hendricks. With regards to their partnership, Vasandani said, "We were both booked on a festival in 2008 where we shared the stage. He was a kind and generous soul and I found him to be lovable from the get-go. He's a gentleman who has every right to be conceited but he really is a wonderfully fresh and exciting spirit."

When asked what he learned from getting to work with Hendricks, Vasandani took his time and thoughtfully responded, "What I take away from someone like Jon is that there's no need to be a jerk. You can accomplish what you want to musically and career wise without discouraging other people."

Vasandani includes many vocal standards in his repertoire but is faced with the task of both selecting songs that may have been written 75 years earlier and trying to make them applicable to his own life. His solution is to break them into two categories: those where he can really relate to the lyric and others that are just fun to sing or offer something pedagogically. "For me there are some standards that resonate as an artist while many other standards resonate more for practicing or getting to know as a teaching tool," said Vasandani. "I did 'Just You, Just Me' on my first album and the lyric isn't legendary but you can have a lot of fun at a higher tempo and improvise with the band."

Showing an awareness of his long-term career plan, Vasandani is careful when selecting material for an album and thus enter into his permanent archive. "When choosing songs to record," he said, "I feel with each passing day that I want to create a body of work that is poignantly autobiographical so that by the end of my productive years I can say, 'At least I was me.'"

Although very comfortable including songs of the Great American Songbook into his repertoire, Vasandani is also writing music that shows he is more than just a singer of someone else's songs. When asked about the melancholy vibe on his "Flood," and how it contrasts with the rest of Hi-Fly, Vasandani said, "Well, it just kind of came out one day. I was sitting at the piano and, honestly, it was just one of those situations where the words and music came together. I wanted to share the story [in the lyrics] because it was timely. It's a darker moment of the album but every record should have some peaks and valleys. Hopefully, if the album is paced right, you have joy and celebration and then there's a time for reflection as well."

After his own moment of reflection, the singer added, "That's kind of what I think of as a birthmark on a very beautiful woman. You see a mark that may be kind of ugly but it makes you appreciate how beautiful the rest of her is."

That sentiment might just as well be applied to Vasandani. He is singing with a joyful tone, but it's the darker moments that show just how bright his talent shines.

Dr. Gregg Akkerman is the author of "The Last Balladeer: The Johnny Hartman Story" and an Associate Professor of Music at the University of South Carolina Upstate in Spartanburg.