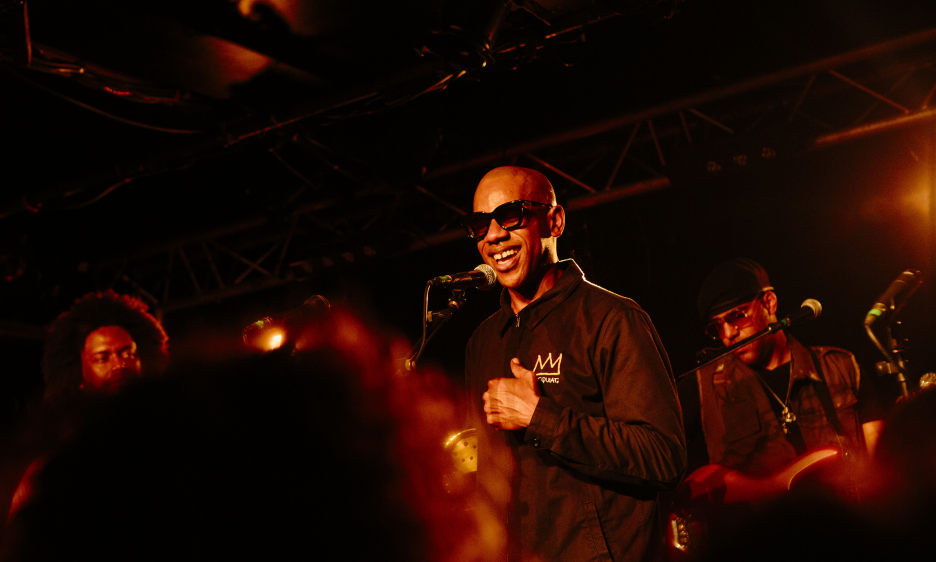 This tour heightened my awareness of the power of my music and how I influence the world. —Ryan Porter

Los Angeles trombonist, Ryan Porter is set to release his first West Coast Get Down live album entitled Live in Paris at New Morning. In this interview, Porter talks about his experience performing on his first European tour, recording the live album, his relationship with Roy Hargrove and the importance of Social Ambassadors.

This live album was recorded at the world- famous New Morning Jazz Club in Paris, France on October 17, 2019 during my very first European tour. We were four days into our 13 day tour when this recording took place. The day before "October 16th" would have been the late great Roy Hargrove's birthday "rest in peace" and I was honored to be playing at New Morning Jazz Club because I knew that it was one of Roy's favorite jazz clubs to play at in the world.

I had never actually been to New Morning Jazz Club before so it was a new experience for me. When we got there it was humbling to see so many people there excited to see me perform alongside the West Coast Get Down. Leading up to the show I watched a lot of YouTube videos of legendary performances at New Morning and of course the one that stood out to me the most was a video of Roy Hargrove performing a song he wrote specifically for New Morning Jazz Club titled "Strasbourg St. Denis."

I was 16 years old when I first met Roy Hargrove. It was 1996 and I was attending a jazz music camp for teenagers called The Vail Jazz Party. The camp was put together by Kathy and Howard Stone and took place in Vail, Colorado.

Roy was super cool and approachable so we clicked right away. In 1997 I moved to New York to attend the Manhattan School of Music and that's when Roy and I became really good friends. I would always go to his gigs and sometimes I would sit in. Roy and I would always hit up after hours jam sessions! We'd start at Cleopartra's Needle and run around the upper west side of Manhattan ending up at place called Small's in the village. We'd play some of the most obscure jazz songs and we'd play all through the night until the sun came up. Roy knew so many songs it was unbelievable and he really enjoyed playing ballads.

Roy was a big influence on me throughout my teenage years. I was eager to learn and I was soaking in all things jazz. I think people often learn better by watching others do the things that they aspire to someday do. Seeing Roy who was an African-American brother who looked just like me play jazz music so well really inspired me and my friends to focus on our music and dedicate ourselves to our craft.

The night of the live recording at New Morning I started reminiscing about my friend Roy Hargrove and I dedicated that night to him as well as the late Madam Eglal Farhi who passed away the week before the show. She was a well respected public figure in Paris and was the owner of New Morning.

The thing that stands out to me the most about the night of the show was the amount of people that showed up to see us perform. It was such a beautiful feeling to see so many people standing in a long line that wrapped around the corner of the building waiting in the cold to experience us perform in Paris, France. I say that because Paris is a completely different world from our home base of South Central, Los Angeles and although all of the members in the West Coast Get Down have worked hard to kick up some dust on the music scene I never forget nights when we performed in front of empty jazz clubs right in our own home city. It was a "sold out" show at New Morning and there was actually a line of people outside waiting to come in the whole time we were performing so I felt an overwhelming amount of love, gratitude and accomplishment that night.

Another moment that jumps out to me and shows the resilience of the group was when our bassist, Miles Mosley broke his upright bass during the performance and we had to take a long break in the show as he unsuccessfully tried to fix it. Someone in the audience ran home and returned with their electric bass. Miles picked that bass up having never held it before and played one of his best performances of our whole European tour.

Social Ambassadors started sometime in the 1930's with Duke Ellington and his band traveling all over the world performing concerts and doing cultural exchanges. This gave people all over the world the opportunity to see, hear and experience intelligent African-American musicians  perform high quality jazz music all while spreading peace and love through the spirit of music. These cultural exchanges also gave the African-American musicians in Duke's band a chance to not only experience different cultures abroad but to also see and feel America from the inside out. This challenged their opinions  and heightened their global awareness about cultural differences.

Duke and his band broke the ice by being the first African-American musicians to tour abroad and this made a huge impact for not only jazz musicians but for musicians of all genres and on cultures all over the world. It also helped polish the reputation of our country. There are people in other countries that may not love America but love African- American culture. This can be attributed to artists like Duke Ellington, James Brown, Herbie Hancock, Micheal Jackson and so on, all Social Ambassadors.

Though Duke Ellington and his band may not have realized it at the time their interactions abroad provided the rest of the world an opportunity to experience African-American culture in a way that they had never witnessed before.

When you make a decision to be a musician/artist, to make an album and to tour abroad you are bearing the responsibility of being a Social Ambassador. I could definitely feel that responsibility while on my first European tour. The Live at New Morning Jazz Club album really made me aware of my purpose and intentions behind my music. It heightened my awareness of the power of my music and how I influence the world. I realized that I can use this influence to spread Peace, Love and Unity throughout the world just like the greats who have influenced me.

West Coast Get Down

Porter is joined by an all-star cast of bandmates from the West Coast Get Down on the this live recording including Kamasi Washington, Jumanne Smith (trumpet), Brandon Coleman, Miles Mosley and Tony Austin.