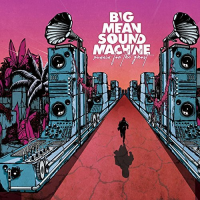 On Runnin' for the Ghost, Big Mean Sound Machine sounds intent on obliterating every imaginable musical border: the lines between regional or geographic styles, the divide between acoustic and electronic instruments, the boundary between live and sampled music, the gap between ancient and contemporary music...just about any and every musical "box" you can think of.

The fourth full-length chapter in the musical story of this ten-piece afrobeat band led by bassist Angelo Peters was inspired by performing with master afrobeat drummer Tony Allen; their liner notes reveal that, "This album is dedicated to the sharing of music and education."

Runnin' for the Ghost continually grows in density, color and dynamics, and feels like you've jammed your ears into the high-speed spin cycle of an afrobeat washing machine. "Seeing the Bigger Picture" synthesizes afrobeat guitar and melody with Afro-Cuban percussion patterns, convening near the Caribbean through Peters' hard-rocking bass line (as if meeting in their geographic middle), with a synthesizer solo wriggling through like a line scribbled in fluorescent color.

"Van Chatter," which blends Central African Soukous with West African Highlife, kicks off from Andrew Klein's drumrolls and just keeps right on rolling. Klein and other percussionists keep this pot boiling hot while guitarist Dan Barker spreads electric juju on top like sticky glittery jam, melting with the horns and the rhythm section into that curious musical place where rhythm and melody meet. As its title suggests, "Triple Bacon" stacks thick slices of meaty bass, drums, percussion and guitar into a multi-decked afrobeat and highlife sandwich, joyous and tasty.

The relentlessly undulating serpentine horn chart in the title track is remarkably arranged and even more expertly played. This tune comes out of the box sounding like it's already been (pre-)remixed by The Chemical Brothers—a computerized rhythm like the underbelly of a rampaging mechanical bull driving a Latin brass band's march through ancient Egyptian deserts, and ending with a birdsong's curtain call of solitary flute against harmonizing electronics. Simply remarkable.

Recorded live, with half captured in a Baptist church, Runnin' for the Ghost presents the sound of tomorrow's music, more than a few days early.