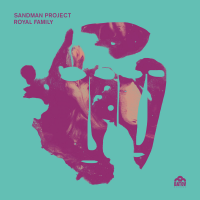 Guitarist Tal Sandman's raw, groovecentric, transcultural Sandman Project draws a hefty chunk of its provenance from Ethio-jazz. The band's EP Royal Family does not contain enough improvisation to qualify as "jazz" however. Further, the Ethio-jazz in the mix, mostly contributed by trumpeter Tal Avraham and bass guitarist Shay Hazan, is less forward than the echoes of the John Lee Hooker-informed desert blues of Ali Farka Toure and traces of late 1960s West African psychedelic rock, strands for which Sandman and drummer Haim E. Peskoff are mostly responsible. This is a simplification of the sound and the inputs, but close enough to convey the gist of four of the five tracks. The exception is "Circles," linked below and the only clip from the disc online at the time of writing.

Despite this caveat, the 23-minute Royal Family has merit. The medley of influences and musical cultures is an accurate reflection of the milieu from which Sandman Project operates, which is Jaffa, the ancient port around which modern day Tel Aviv grew. Jaffa is like parts of London or New York, where a community drawn from diverse ethnicities, and with a higher than average proportion of creative people, lives fruitfully and, in the main, harmoniously. So hooray for Jaffa and hooray for Sandman Project. Autumn 2018 is a good time to celebrate diversity rather than rolling out more barbed wire.

Tal Sandman's key musical mentor was saxophonist Abatte Barihun. An Ethiopian Jew, born in Addis Ababa and resident in Israel since 1999, Barihun is a modal-based player and is sometimes, predictably and rather lazily, called the Ethiopian John Coltrane. He tutored Sandman in the subtleties of the Ethiopian tezeta mode, which has similarities to the African American blues scale. The tezeta is at the root of Ethio-jazz and is heard in much of the music on Royal Family.

Sandman spent her musical apprenticeship in Barihun's bands. Maybe next time out we might see Sandman Project featuring Barihun as a guest artist. The prospect is an intriguing one.