Marc Copland / Greg Osby: Round and Round 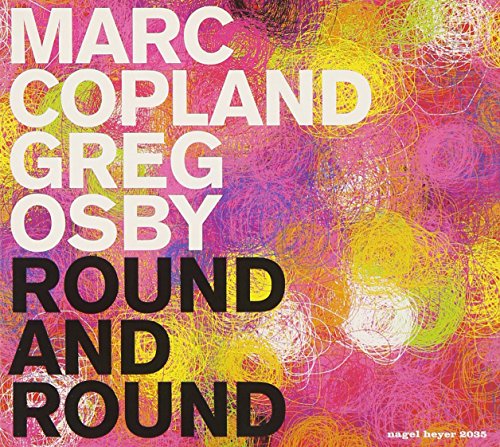 It has been a busy few years for pianist Marc Copland who has, since 2001, released as many as four albums in a single year. From the solo recording Poetic Motion to group recordings including Haunted Heart and Other Ballads and And"¦ , Copland has continued to hone a style that is marked by profound impressionism and a penchant for dark, brooding material. He has demonstrated an eagerness to explore ongoing musical relationships, as he has with Gary Peacock on What It Says , as well as new ones including Round and Round , which teams Copland with alto saxophonist Greg Osby. Found in an unusually introspective mood, Osby is another ideal foil for Copland, who seems to pair naturally and empathically with everyone he meets.

In stark contrast with Bookends , Copland's 2002 duet recording with the more expressionistic saxophonist Dave Liebman, that was an exercise in contrast, Osby is more malleable and fits comfortably within the scope of Copland's musical vision, where as much is implied as is actually played. Even Osby's compositional contributions are a far cry from his more typically assertive, post bop pieces. "Copious" dwells in abstraction, with Copland applying textural splashes while shifting in and out of time; "Silent Attitude" is a melancholy tone poem that feels somehow reverential.

But it is Copland's writing that is the centrepiece of this recording. The ten-minute "Whatever The Moon" has a pensiveness that recalls some of Ralph Towner's more inward-looking material, but is less tangible. The form develops languidly; Osby contributes quiet long tones through Copland's tender solo that enhance the overall harmonic richness of the piece. "The Wizard" layers a staggered melody over a quietly insistent rhythmic backdrop. "Deed-Lee-Yah" is the closest the duo comes to real bop; Osby is in more familiar territory but Copland challenges him with a more abstruse accompaniment.

Copland's playing demonstrates an obscure sense of romanticism; nowhere near as obvious as many of his sources, he has been developing a style that is harmonically imaginative yet completely engaging and soothing to the ear. Even at his most abstract there is nothing harsh or angular about his playing; and when he interprets a standard like "Easy Living" he brings to it a delicate lyrical sense.

Round and Round is another fine recording from a pianist who is gradually developing a reputation but has yet to make the leap into more broad exposure. Clearly, on the strength of this and other recent recordings, Copland deserves a larger audience. Surely, with beautifully recorded albums such as this that demonstrate a consistent yet evolving conception, and an outstanding ability to work with a rich variety of artists like Osby, the time will come when Copland is recognized as the artist of consequence that he truly is.