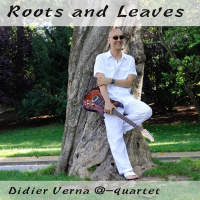 Parisian guitarist Didier Verna plays very much in the Pat Metheny tradition but with a sunny, melodic touch. His music is well thought out but never overly serious, with humor playing an important part in his compositions and improvisations.

Roots And Leaves, the title of this, his second album, was chosen with care. Verna says: "Roots are our foundation, our basis, our legacy and our culture... leaves are the multiple, blooming facets of our personality, our character and our uniqueness."

He names the Quebecois band Uzeb as one of his influences but is less reliant on synthesisers than they were. And he is far more down to earth—often downright funky—than another mentor, John McLaughlin.

Verna calls his quartet "@," insisting that it should be pronounced English-fashion as "at," even though his fellow countrymen prefer "aerobase" (the final "e" is optional).

The songs are all originals. "Old Times" is based on a former practice routine. It's a gently swinging piece with a nostalgic feel, featuring solos from the leader and pianist Laurent Epstein, known for his work with manouche jazz guitarist Patrick Saussois and New Jersey alto saxophonist Richie Cole, among many others.

It's followed by a more recent composition, the up tempo "Circulocentrique." Verna says of this one: "It turns around itself. It's the chicken and the egg, the dog biting its own tail." He establishes a solid groove with bassist Yoni Zelnik.

By contrast, the standout track, "Coconette," is a lovely, lilting, very folksy number that Verna sings to his daughter Coline at bedtime. It's reprised as a solo at close of play.

Verna has a real feel for the blues, typified by "Vert de Blues (Green Blues)." It's called this because, he says, "it's a blues that's not fully ripe." Its "unfinished" quality is its charm. It starts slowly, almost uncertainly, then builds, with some dazzling guitar runs before solos by Zelnik and Georgelet.

The waltz "Petite Mort (Little Death)" belies its rather ominous name, rivalling "Coconette" in terms of melody. Epstein is in fine form on this one.

"Minor Nuisance" and "YYAB (Yet Another Blues)" are jaunty toe-tappers, while "Maroc" is a more serious, impressionistic piece, inspired by a trip to the Draa Valley in Morocco.

A lot to listen to, but never hard work.