By Paul Rauch
November 8, 2018
Sign in to view read count 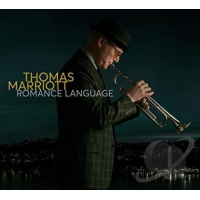 Trumpeter Thomas Marriott has established his jazz credentials over the years through a collection of beautifully inspired and well received albums on the Origin Records label. His formidable chops, extensive vocabulary, respect for tradition and penchant for musical adventurism has put him into the conversation concerning the top practitioners of his instrument in modern times. Marriott has the rare ability to look deeply into the matter at hand, whether it be through interpretation of classic repertoire, or performing his deeply reflective and emotive original compositions.

Those who have spent time around Marriott on the scene in Seattle and abroad have been hearing for a decade about a special project he had in mind that slowly began to supersede his other musical ambitions in recent years. He described it as a record more focused on melody as opposed to soloing, that in the end expresses beauty.

In a September, 2016 interview with All About Jazz, Marriott alluded to the project that would in a sense be an opus of melody, tone, and the illumination of hope, romance, and beauty.

"I have a project that is a little more monumental for me, it's bigger budget for sure. I've been trying to make this record for almost ten years, and I've been in the studio on a couple different sessions trying to make it. It's a little hard to put into words, but, essentially, if you can picture an album that's more about melody than it is about improvisation, kind of like a "with strings" record, but not with strings, although there may be some strings on it. So not a "with strings" record, but a record where I'm the singer, and it's sort of treated that way where it's not about burning interplay between the cats, as much as it is a statement of giving. It's been a lot of figuring out what the material is going to be, there's been as much planning as any project I've ever done, maybe ever. Part of it is I feel there is a place for me to make that statement, not trying to make a killing jazz album, not trying to make a statement about anything political with this particular album. I'm not trying to show off any particular aspect of my musical ability. I just want to make it about beauty, because I feel like that's what people really need to hear. If you think of being a musician as in a sense of somebody who tries to uplift people during a show, either through a funky groove, or through a long exploration of an idea, whatever it is to take people on a trip, on a journey to help them feel better, to perk up their spirit, help them get on with their day. I think that if that is a goal, then I think that by putting something out that is just about melody and beauty can be more effective to more people," says Marriott. His new release Romance Language (Origin, 2018) is the fulfillment of that notion.

Marriott again joined forces with old friend Joe Locke, himself a master of producing well conceived albums, along with long time mates Jeff Johnson and John Bishop. He then began working with pianist Ryan Cohan, whose variety of talents made him the perfect choice in bringing his vision to life.

Marriott opens this collection of tunes with his interpretation of Randy Newman's "Dexter's Song" from Penny Marshall's 1990 masterpiece, "Awakenings." Marriott carries the melody with a stunningly beautiful tone, a well noted quality of his playing seemingly ascended to an even higher level throughout this record. Locke, a true modern master of the vibraphone, blends perfectly with the piano of Cohan, creating a sonic, harmonic wash of sound to which Marriott paints this striking melody of light and hope. Cohan's string arrangement adds a ribbon of color that sets the emotional pulse of the tune.

"I Remember Sky" is a little-known Sondheim gem from a 1966 TV musical on ABC's Stage 67 series. Lyrically it speaks to the world of dreams, imagination, and symbolism. Cohan's orchestrations create a vision of endless sky behind a drifting melody from Marriott. Cohan and Locke form a seamless harmonic cohabitation, allowing the trumpet to honor the melody. Marriott plays from a sentimental place, evoking a feeling of deep reflection.

"Ghost In This House" is a Hugh Fleetwood tune made famous by the country band, Shenandoah. Alison Krauss' version on her 1999 release Forget About It (Rounder, 1999) perhaps best expresses lyrically this song about love, heartbreak, and the memories thereof that linger in the soul. The melody allows Marriott to explore long, vibrant, romance-tinged tones that lead the listener to a lonely place steeped in melancholy and remembrance. While the stated premise of this record is melody, Marriott's solo further speaks to the emotive premise of the tune.

On "Alibi Room," Marriott turns to Locke's compositional prowess on a tune with a distinct metro vibe. His haunting, muted solo fits perfectly into the city beat pulse of the melody, acting as more of an embellishment on that melody, rather than a departure. There is an infectious quality to the vibe that in many ways is definitive in its statement of melody and reactive sentiment. It feels as though Locke penned the perfect tune for Marriott's approach to melody and improvisation.

Recording a piece such as Harold Arlen's "Somewhere Over The Rainbow" takes a special kind of interpretive courage. Yip Harburg's lyrics answer the interpreter's cry for a place where there isn't any trouble, where eternal hope springs forward and provides refuge for the human spirit. Marriott's rendering of the classic melody somehow renews it in a new light , while maintaining the vision the tune fulfilled in 1939 in the timeless movie classic, The Wizard of Oz. We are taken to a place in the modern sense, where all the turbulence and uncertainty of the times are put aside and our sights are fixated on the eternal spirit the gift of life brings to us each day. In that way, as is the case with each selection on Romance Language, the music sequesters a hidden gem of hope and positivity in us through the wisdom of beauty.

We are sure to hear from Marriott's sense of post-bop adventurism on upcoming releases and live performances. Whether playing with his Seattle based quintet, or recording and performing with jazz notables such as Orrin Evan, Eric Revis, or the Spanish Harlem Orchestra, his unique approach to melodic improvisation and composition will continue to transcend traditional lines of creative thought in such a way that maintains a firm connection to the blues. With Romance Language, he strips away the preconceived notions of a modern jazz album to provide repose in melody, in soaring interpretation of song. His music here finds ways to touch the outer boundaries of beauty, and delve into its infinite core of being. The results are nothing less than visionary.