By LARRY TAYLOR
February 11, 2012
Sign in to view read count 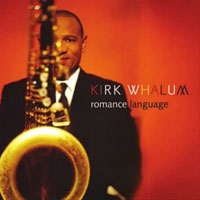 Romance Language is very appropriate for Valentine's Day—the perfect background for a romantic evening. Tenor saxophonist Kirk Whalum has teamed up with his brother, vocalist Kevin Whalum, on this recreation of the classic John Coltrane and Johnny Hartman (Impulse!, 1963).

Moreover, throughout this daunting task, the brothers succeed in brushing a smooth jazz veneer on the great ballads celebrated in the historic original release. The Whalums' effort follows vocalist Kurt Elling's tribute album, Dedicated to You: Kurt Elling Sings the Music of Coltrane and Hartman (Concord Music Group, 2009), recorded live at Lincoln Center.

While Elling branched off with new interpretations, Whalum favors Coltrane and Hartman's straightforward, no-frills approach, his ripe sax providing effective backing with important help from keyboardist John Stoddart, as well as arrangements replete with flutes, strings and brass. His brother's light tenor voice doesn't measure up to Hartman's great baritone, but whose would?

Irving Berlin's "They Say It's Wonderful" establishes the CD's prevailing tone right away with a lush, mellow vocal enhanced by Whalum's feathery sax, and dreamy keyboards weaving in and out in support—sweet but not cloying. The saxophonist also shines in the long introductory solo to Wood/Mellin's "My One and Only Love."

Romance Language reflects the stature that the Hartman/Coltrane recording has held for almost 50 years. Doubtless, it will continue to be an inspiration to future generations.

Track Listing: They Say It's Wonderful; Dedicated To You; My One And Only Love; Lush Life; You Are Too Beautiful; Autumn Serenade; Almost Doesn't Count; I Wish I Wasn't; I Wanna Know; Spend My Life With You.