By GLENN ASTARITA
October 11, 2016
Sign in to view read count 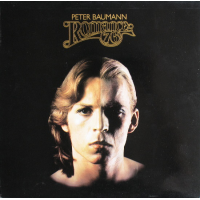 German keyboardist Peter Baumann was a co-founder of the innovative electronics trio Tangerine Dream who seeded new genres and offshoots such as krautrock, new-age music, progressive psychedelia and so on. He remained with the band until 1977. Moreover, Romance 1976 marks Baumann's inaugural solo album, and signifies a distinct contrast from his work with Tangerine Dream, revered for its oscillating and highly rhythmic use of synths, modeled with memorable riffs, up- tempo soloing jaunts and cascading developments.

Baumann uses space as an equalizer and is a factor that invites the listener to zoom in on the compositional aspects of his work. And from a reissue standpoint, the original Virgin Records master reminds many of us of its historic audiophile grade engineering processes that adorned classic albums such as Mike Oldfield's Tubular Bells and of course many Tangerine Dream albums —referred to as the ensemble's Virgin Years —and numerous Euro-progressive rock ensembles. Consequently, Baumann started the Private Music record label in the 1980s, which was an early motivational force for new age music, featuring artists such as Jerry Goodman (Mahavishnu Orchestra) and Patrick O'Hearn (Frank Zappa, Missing Persons).

This is a highly artistic endeavor as Baumann sculpts a mélange of daintily melodic soundscapes via his stout single note synth lines and percussion treatments amid a host of delicately executed tonal shifts. It's a song-oriented program and not quite as busy as many would anticipate, given Tangerine Dream's pulsating ostinatos and thrusting storylines. Baumann doesn't necessarily harp on a new age like sojourn into the netherworld as his compositions feature layers of sound and contrasting cadences. On "Romance," his trickling effects colorize a mid-tempo arrangement built on cyclical passages and hallowed voices that tender a sanctified imprint of sorts. Unlike many of his peers during that era and beyond, he takes his time developing themes and plots, negating any semblances of a cluttered presentation.

At times Baumann integrates symphonic choruses with crisp notes and thought provoking cadenzas. But "Meadow of Infinity (Part 1)" begins with a tom-toms framed procession, topped with angelic choral voices morphed into the background. In sum, the artist pays strict attention to detail throughout. His sharply focused game-plan vividly weathers the scrutiny of time, 40-years after the fact.