By DOUG COLLETTE
November 13, 2016
Sign in to view read count
It might be fair to say that any concert appearance by a band with fifty years plus history is an occasion in itself and doubly so (or more) to offer that observation about the The Rolling Stones. Who would've guessed in 1963, 1973 or 1983 that the group would not only still be together in 2016, but playing regularly around the world? Or remain a sufficiently popular draw to attract the huge crowds that attended the concert(s) in London's Hyde Park in 2013 and, three years later, the free show in Cuba in March. Playing with a vigor matching, even transcending the spectacular production of these concerts, the Rolling Stones render them worth recording on audio and video, not just to memorialize the occasions but document the vitality at their longstanding unity. 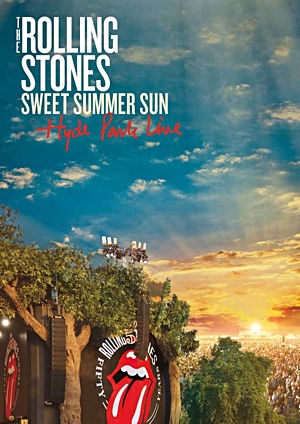 The fact this CD/DVD set (a jewel box within a j-card) isn't packaged in the stylized sets of the Stones 'From the Vault' releases of recent years (and this title's companion piece) doesn't lessen either its value or attraction. Nineteen songs from two shows (one on the very same date of the band's pivotal return to the stage in 1969) differ slightly, but the varied inclusions only point up the wisdom of issuing Sweet Summer Sun in both configurations.

Because the gloriously sloppy playing offsets prosaic material such as "It's Only Rock and Roll (But I Like It) and enhances the power of great songs like "Street Fighting Man"-where guitarist Keith Richards emphasizes the tune's rhythmic foundation as much as bassist Daryl Jones' descending run at the end-the performance is well-worth repeated hearing as much or more than viewing the film more than once.

And that, in turn, is a tribute to how well such songs as "Gimme Shelter" have aged : holding to the splendid original arrangements of numbers like that and "Honky Tonk Women," with horns complementing Chuck Leavell's barrelhouse piano, also reaffirms the wisdom of the sit-in by Mick Taylor during "Midnight Rambler;" the once-estranged guitarist aids in reinforcing the song's (and by extension the band's) blues roots, almost but not quite as forcefully as drummer Charlie Watts' booming rhythm.

As captured in a variety of panoramic shots by filmmaker Paul Dugdale, the theatrics on that tune and during the even more extravagant production of "Sympathy for the Devil" end up being extensions of the atmosphere within the material itself; even the fire and faux brimstone with Jagger in costume on the latter isn't so scary as Keith in smoky shadow silhouette or playing dirty blues rock with jovial guitar partner Ronnie Wood.

It's most appropriate this Rolling Stones show takes place in the heart of London, England to prove how fully and completely they've assumed the collective role of the Charles Dickensian characters they've created with "Jumpin' Jack Flash." 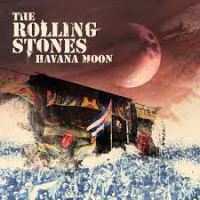 Various stages of rapture in faces and body language around the stage in 2013 reappear in 2016 where a juxtaposed finale of "You Can't Always Get What You Want" and "(I Can't Get No) Satisfaction" couldn't more telling. Unless it's than the inclusion of "Before They Make Me Run" on both these Stones live packages: a slice of life of Richards' from Some Girls (Rolling Stones, 1978), it might well serve as a theme song of the Rolling Stones these days every time they take the stage as continuing into their second half century?!.

In theaters for one night only in the autumn of 2016, around the world except for the United States, Havana Moon is really no more or less a vivid film than Sweet Summer Sun even given its sociopolitical significance, except that the Stones' playing is superior, not surprising as this was the culmination of their Latin American tour. Again, director Dugdale captures and reemphasizes the mammoth scale of the event with the three-dimensional interweaving of camera angles over above and around the massive stage into the equally mammoth, multi-demographic audience. The filmwork might be dizzying if he didn't tie its motion to that of the music itself, which transfixes from its start and builds in intensity.

The real cinematic drama lies in the interaction between the ten-member group of singers and musicians, manifest as clearly in Keith Richards' nods to bassist Daryl Jones as in his sharing of the spotlight (captured perfectly in a color shot within the twenty-page booklet) with Mick Jagger as he interweaves tart harp tone with the guitarist's acidic solo on the otherwise nondescript "Out of Control."

The polish of of Bob Clearmountain's audio mix, as preserved by Marcussen Mastering, does nothing to remove the fundamental edge from the band's sound and even in the abridged sequence of songs on the DVD, the expert pacing of the setlist is all too obvious. As is Jagger's restraint in making sure he doesn't run around so much his singing suffers; in face, all the way through to the encore, he seems as enlivened by the music as anyone in the audience.

And, in line with the various voice-overs of his and the other bandmembers in the film's intro and pre-encore footage, the iconic frontman displays a genuine humility in sharing the stage, not only with Sasha Allen on "Gimme Shelter," (where she nails her solo vocal), but in standing in between her and counterpart vocalist Bernard Fowler, near the end of "Sympathy for the Devil," basking in the accompaniment of the crowd.

That interlude is notable as just one of the many unprompted singalongs and chants from the gigantic all ages audience, the source of which is the durability of great originals ranging from "Paint It, Black" to "Brown Sugar." The power of the Rolling Stones' performance renders secondary not just the fireworks and big screen projections around the giant stage and its runway, but also the bright, full moon shining in the Havana sky.