By Doug Collette
December 29, 2017
Sign in to view read count
The late Ronnie Montrose was a guitar hero for our times if there ever was one. An uncommon combination of skills in which he fused as much finesse as power enabled him to assume him a wide-ranging series of sideman gigs and solo projects, the dual results of which were, unfortunately, inextricably intertwined: he was impossible to pigeonhole and thus relegated to toiling under the radar during his multiple-decade career before his untimely passing in 2012.

Nevertheless, the diminutive fretboarder managed to amass a truly impressive resume before his untimely passing in 2012. Montrose affixed his indelible sonic stamp on music as widely-disparate as The Edgar Winter Group's breakthrough album They Only Come Out At Night (Epic, 1972) around the very same he was so stylishly embellishing Van Morrison's Tupelo Honey (Warner Bros., 1971), most conspicuously its hit, "Wild Night." And this happened before the formation of the Montrose quartet by which Sammy Hagar, was introduced to the world at large, more than a decade before the so-called 'Red Rocker' took David Lee Roth's place as frontman/vocalist for Van Halen.

It's a measure of Ronnie Montrose's influence that Eddie and his crew covered "Make It Last" as part of their early repertoire. And it's worth noting that the co-producer of the two eponymous Montrose quartet albums, now available in expanded double-disc sets, was Ted Templeman, who helped shepherd VH to stratospheric commercial heights (after additional collaborations with The Belfast Cowboy). All this activity was going on even as Ronnie himself was in hot pursuit of the restless creative urges built on his past work alongside other such open-minded adventurers as one-time bandmates of Miles Davis, Herbie Hancock and Tony Williams.

Such explorations set the course for Ronnie's future eclectic expeditions: constructs into jazz-rock fusion, more pop and ingenious electric guitar/synthesizer blends, with groups like Gamma and other units under his name, the end result of which served to solidify his reputation, albeit on a somewhat unsung level, at least compared to contemporaries with less distinction and imagination. 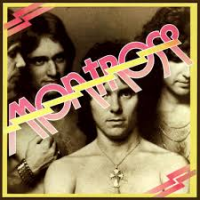 Even if Mike Mettler's liner essay for the eponymous Montrose album reissue becomes a bit repetitive before it concludes, it's worth reading if only to be reminded (or discover) Ronnie Montrose played a prominent role as a soloist on "Free Ride" and "Frankenstein," the best-known tracks from Edgar Winter's breakthrough album, these memorable contributions in addition to adding an indelible stamp to a pair of Woodstock-era works of Van Morrison's including St. Dominic's Preview (Warner Bros., 172) and touring with Boz Scaggs. The short sweet thirty-two minute duration of its eight total tracks sall four members of Montrose (including the deceptively inconspicuous bassist Bill Church) unveil the sign of many a great musician, that is, a sense of marshaling the intensity in their playing/singing rather than trying to conjure it up. Only slightly less palpable in the bonus content of demos from the album, perhaps with the exception of "Shoot Us Down," that very same sensation is more notable (and ripe for durable listening) in the live recordings of roughly an hour that, like the superior quality audio on its companion piece, come from promotional radio appearances: the group, including a pre-Van Halen Sammy Hagar, blasts its way through taut, blistering ten takes of proto-metal hard rock like "Rock Candy, " the sum effect of which is almost as uplifting as on the corollary studio work because, in addition to the namesake's buzz-saw guitar, the lead singer's swagger is real and drummer Denny Carmassi could not be more tightly-wound. 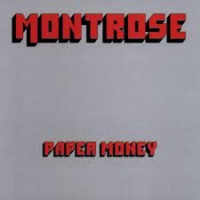 As indicated by the bandleader's solo acoustic turn "One And A Half," (also courageously included on the live radio performance here that otherwise relies on culls from the first album),Paper Money constitutes a harbinger of things to come under the leader's name, during which he displayed greater discipline than this hammer-down style might normally allow (though "I Got the Fire" is replete with such admirable restraint). In stark contrast to the stripped-down likes of its predecessor, released around the same time the prior year of 1973, spacious, layered arrangements here include keyboards on some more contemporaneous cover material (Rolling Stones' "Connection" in acoustic mode) than its predecessor ("Good Rockin' Tonight" and "Roll Over Beethoven"), all of which benefit from the similarly-remastered sound (to greater stereo effect than its predecessor). The generic font emblazoned on this album cover belies its healthily-expansive approach (and the over-reliance on culls from the first album in the live radio performance it includes) as do the bare-chested group poses on their debut album cover; tongue-in-cheek as the array of those outtakes looks, the photos give further belie the oft-repeated and glib reference to Montrose as 'the American Led Zeppelin:" For one thing, this California-based quartet virtually never appropriated the blues to their own ends, while Jimmy Page and company rarely conjured up such vivid atmosphere as radiates here from "The Dreamer" and "Starliner," not to mention "We're Going Home" (sung by Ronnie Montrose himself).