By J Hunter
June 7, 2010
Sign in to view read count
Memorial Day, 2010 has come and gone, which means summer is right on its heels. And with summer comes further—and louder—reasons to fire up the grill, cool down the beer (or whatever), and get friends and/or family together to celebrate...well, whatever occasion is handy, up to and including surviving the work week. A party without music is like a party without a snacks table, but who says that music has to be boring or predictable? Here are three suggestions for some convivial atmosphere that won't insult anyone's intelligence.

Guitarist Les Paul is not just a legend; he's a brand, with his name attached to one of the most famous axes in use today. But many of the current generation probably don't realize that Paul and vocalist Mary Ford had more than a few hits in their day. Tales from the Tiki Lounge captures a time when the husband-and-wife duo were on the radio with Lady GaGa regularity.

"Bye Bye Blues" starts out loping, but then it picks up speed like a car being push-started at the top of a hill. It's all ringing Texas swing when Sunny Crownover starts belting a vocal as happy as the ringing guitars Duke Robillard flanks her with. Robillard plays a 1956 reissue Les Paul Goldtop on this and other cuts, as well as other guitars that help him re-create Paul's ground-breaking sound. Multi-tracking and guitar effects are old hat nowadays, but it's easy to see why they were so startling when paired with the melodic voodoo Paul did so well.

In Crownover's section of the liner notes, she credits Ford's organic approach to vocal style, "(with) natural charm and charisma without pretense." Ford's vocals were as conservative as Paul's production techniques were innovative. The dichotomy was one of the things that made their records so delightfully different, and is why the standards "Besame Mucho" and "Goody Goody" work so well here. Tiki returns to Texas swing with the Paul original "I'm Still in Love with You," but it also nails Paul and Ford's skill with a ballad on "Smoke Rings" and "I'm Confessin' that I Love You"—the latter piece featuring an army of strummers from the Providence Mandolin Orchestra.

In addition to revisiting Paul and Ford's songbook, Robillard pulls out period material that dovetails with the honorees' performing style. The Mae West hit "Occidental Woman" wouldn't pass the P.C. test if it was released today, but Robillard and Crownover give it some Old School swoon, wrapping the first verse in scratches and hissing straight out of Grandma's collection of 78s. Robillard "re-creates" the two versions of "Put the Blame on Mame" that appear in the Rita Hayworth film Gilda—the one where Hayworth accompanies herself on solo acoustic guitar, plus a full-band version where Hayworth established herself as the sex kitten of her day. The only misfire on Tiki is a straight reading of Willie Nelson's "Crazy": Robillard hits the guitar part out of the park, but Crownover's vocal is no match for Patsy Cline's original.

Retro music always livens up a party, even if it garners comments like, "Oh, good! Here comes the cheese course!" Hopefully, the smart-alecks will listen a little deeper and see what love, care and detail Robillard and Crownover have put into this heartfelt tribute.

Visit Duke Robillard on the web. 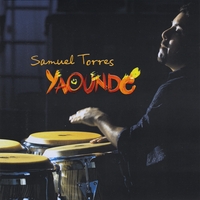 No party is complete without salsa. However, there are too many brands on the market that try to overpower anything they touch, just so they can mask the fact that the ingredients are pretty simple—or, in some cases, just not that good. In the case of conguero Samuel Torres' latest effort, the ingredients are exemplary, and there's a lot more to Yaoundé than just hot and spicy.

Torres, keyboardist Manuel Valera and bassist John Benitez build a three-layer foundation to "Un Atardercer en Cartagena de Indias" before the front line kicks in with a dancing, happy melody that wants to be your friend more than it wants to clear the decks. Michael Rodriguez' trumpet solo is seriously motivating, even though he's not trying to break eardrums with his power. Joel Frahm follows up with soprano sax that snaps and crackles; the soprano is an uncharacteristic choice for Latin jazz, but when combined with Valera's affirmative piano chords, it works like a charm.

Valera's keyboard work is a real difference-maker on Yaoundé. While he's got the percussive sense required for this genre, Valera's piano on the title track and on "Cosita Rica-The Richness of the Small Things" has the kind of complexity Gonzalo Rubalcaba brings to his own works. Valera's left hand simply rocks, and his Fender Rhodes is scintillating on the smoking pieces "Camino del Barrio" and "Lincoln Tunnel." Frahm also plays soprano on the sharp ballad "Bambuco," but that doesn't mean he forgot his juicy tenor sax, which he wields in soulful stead on "Cosita" and the sensual dance number "A Rose." Anat Cohen slips Klezmer-like clarinet solos into "Macondo," a marvelous snapshot of the multi-cultural atmosphere of New York City.

It would take an army to play all the percussion instruments Torres utilizes throughout Yaoundé, but he sticks to his congas to galvanize the full band pieces, as well as to shape most of his free-standing solo pieces like "Oye" and "Chia-The Moon Goddess." He moves to the kalimba (thumb piano) for the gentle, loving "La Nina en el Agua," but the congas return on "Ronca el Canalete," an entrancing duet with vocalist Sofia Rei Koutsevitis. Whether the music is a full-band experience or a solo spot, Torres' compositions tell stories and construct characters that are both vivid and unique.

Yaoundé is not store-bought. This is home cooking, made with love and subtlety and a knowledge that it takes more than heat and volume to make a musical meal.

Visit Samuel Torres on the web.

Deep meaningful conversations happen often at late-night parties, and they are invariably swallowed up by mental fog by the time the sun comes up. Bassist Andy Cotton found a unique way of avoiding that problem: roll tape. In fact, he did just that in 2009 when a group of friends and colleagues gathered at the Havermeyer Ranch, Cotton's New York apartment/studio. The result is Last Stand at the Havermeyer Ranch, where the musical dialogue is very deep, occasionally meaningful and unquestionably worth remembering.

"Redux" opens Havermeyer on sort of a futuristic note, as Cotton's bass and Matt Ray's Fender Rhodes play a buzzing figure over drummer Yuval Lion's Second Line rhythm. Up pops a horn section that starts chording like an Old School reggae band; trumpeter Avishai Cohen steps out of the line and starts harmonizing with Ray as Cotton goes to town. The piece has a serious beat that begs to be danced to, and Ray's Rhodes really speaks to the evil side of the night. Eventually the horn section abandons its accents and starts to make "Redux" spin like a top while Cohen gets into a roaring back-and-forth with tenor man Kris Bauman. The music spirals up and up and up—and then literally dissolves into giddy laughter, like most things at good parties.

Havermeyer boogies on well past the dawn, disbursing magnetic bursts of jazz, blues, house and even bluegrass and Celtic reels—the latter coming from Alicia Joe Rabis and Rob Hecht's exemplary fiddles on the grooving "Ouagadougou." This piece is an extension of "Early in the Morning," where Mayteana Morales' dissipated vocal encapsulates a hollowed-out girl who really wants to get off the party train, but knows she doesn't have the strength. The flip side of that lyric is the cool-as-a-rule spirit Chauncey Yearwood puts into the gospel-blues tune "Don't Let it Get to You." Bauman's sax goes with the flow on "C Minor Reggie," and Trip Henderson's wailing harmonica injects thrilling blasts of electricity into "Ouagadougou" and "The Prophet has Arise."

"Arise" and "C Minor" are just two of multiple pieces that skank up Havermeyer with infectious reggae, most of it spiced up by traditional dub effects. It's all good fun until the effects obscure the music, as they do on "Gunga Din." The disc comes to a surprisingly spiritual ending with the understated Cotton/Ray duet "Macallan's Waltz." It's a fine decompression at the end of a pretty cool get-together. Or, at least, good background music for the morning-after cleanup.

Visit Andy Cotton on the web.

Tales from the Tiki Lounge

Last Stand at the Havermeyer Ranch