MATT RAY is a Brooklyn-based pianist, singer, songwriter, arranger, and music director. His arrangements have been called “wizardly” (Time Out NY) and “ingenious” (NY Times), and his piano playing referred to as “classic, well-oiled swing” (NY Times) and “to cry for” (Ebony). For his work on Taylor Mac’s show A 24- Decade History of Popular Music he and Mac shared the 2017 Kennedy Prize for Drama Inspired By American History. Notable live performances include playing at Carnegie Hall with Kat Edmonson, headlining his own show at Lincoln Center, playing the Hollywood Bowl with reggae legend Burning Spear, and touring the Caribbean and Central America with his piano trio as a US Department of State Jazz Ambassador. Other work includes music directing The Billie Holiday Project at the Apollo Theater in Harlem, penning a string and piano arrangement for the fifth season finale of Showtime’s Nurse Jackie, music directing for Justin Vivian Bond, performing with Joey Arias, a month of shows at the Edinburgh Fringe with Lady Rizo, music directing Taylor Mac’s Obie award winning play The Lily’s Revenge at the HERE Arts Center in New York, and co-writing songs for and performing in Bridget Everett’s one-hour Comedy Central special Gynecological Wonder as well as Everett’s hit show Rock Bottom. Matt has released two jazz albums as a leader: We Got It! (2001) and Lost In New York (2006); and one album of original pop/folk material called Songs For the Anonymous (2013).

“A pianist whose plaintive playing was to cry for” — Ebony

“Wonderful—so instinctive” — Across the Arts UK.

“A 24-Decade History of Popular Music is markedly enhanced by the lush musical arrangements created and conducted by Matt Ray (I’m not gushing, these orchestrations are a genuine class act).” — George Heymont, Huffington Post 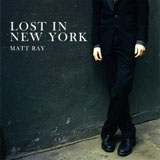 All About Jazz musician pages are maintained by musicians, publicists and trusted members like you. Interested? Tell us why you would like to improve the Rave Tesar musician page.