By KARL ACKERMANN
December 2, 2017
Sign in to view read count 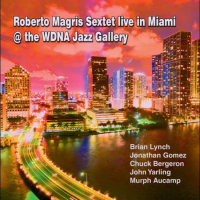 Italian pianist and composer Roberto Magris is restless in his stylistic approach. With more than two-dozen recordings as a leader/co-leader he has covered numerous sub-genres in a variety of group formats. Magris' career is steeped in bebop but with Enigmatix (JMood Records, 2015), with his American trio, he takes a modern European jazz approach with an underlying global flavor. As co-leader of the MUH Trio on Prague After Dark (JMood, 2017), Magris and his Czech Republic partners opted for a straight-ahead approach. Magris changes course once more with a well-assembled mix on Roberto Magris Sextet Live In Miami @ The WDNA Jazz Gallery.

There is a semi-pervasive Latin theme on Live in Miami particularly on the opening number "African Mood" and "Song for an African Child." The titles may indicate more of an Afro-Cuban style, but that's not the case. Trumpeter Brian Lynch and tenor saxophonist Jonathan Gomez offer standout solos as does the leader. "What Blues?" returns Margris to his familiar hard-bop territory before Rahssan Roland Kirk's "April Morning" quiets the program down for a ten-minute respite. Along with Billy Strayhorn's "A Flower is a Lovesome Thing"—the second of two covers—Magris reserves the moments of reflection for compositions other than his own. The album closes with the mid-tempo "Blues For My Sleeping Baby," a moving tune that, unfortunately, fades out rather abruptly in just over two minutes.

By no means hidden from the spotlight, this sextet moves Magris back a bit in order to share the stage with some fine soloists. At nearly seventy-seven minutes, however, there is ample time for all the players to shine. The rhythm section does a super job in transitioning across the many styles in this performance. Margis is not given to flamboyant outbursts though he occasionally inserts some knotty free jazz groupings into his otherwise structured charts. The music of Live in Miami is energetic, complex and attention holding throughout.