By JERRY D'SOUZA
November 8, 2004
Sign in to view read count

Certainly the jazz tradition will remain the natural background, but there will be new possibilities of expression through digital musical. —Roberto Magris

Roberto Magris was born in 1959 in Trieste, a city in Italy that sits at the top of the Adriatic Sea. Within its confines are people who had their origins in the surrounding countries among them Slovenia, Croatia, Austria, Hungary and Germany. It is a sort of melting pot, with an effect on the culture of the city including music. This would have an impact on Magris' development as a musician, one that would take him beyond the institutionalized meaning of jazz.

Magris began piano lessons when he was four. His parents approached the teacher of their neighbour's son who took the young boy in, if for no other reason than, "it seems that I looked very interested" as Magris puts it. "They discovered by chance that I have perfect pitch", he continues. "So, I learned the basic musical matters and to push the piano keys before writing or reading the alphabet. I kept on taking piano lessons until I was 16. (By then) I was a bit fed up with classical music even if I loved, and still actually love, Russian composers like Mussorgosky, Rachmaninoff and Arensky." But Oscar Peterson was the turning point when it came to jazz. It happened when "I listened by chance to the The Way I Really Play on MPS-BASF. That was the beginning of my devotion to jazz music."

The revelation came in 1977 and by the early eighties Magris was a member of Grupo Jazz Marca with whom he recorded three albums. Soon thereafter, in 1987, he formed his own group, a quartet that had Marco Castelli on saxophones, Luigi Rossi on bass and Davide Ragazzoni on drums in its first incarnation. Magris, however, did not let it rest within those confines. Depending on the vision and the scope of his music, the band moves from a quintet to a sextet. 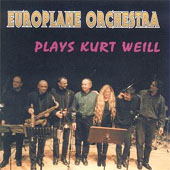 There is an evident restlessness in Magris. He is not content letting the waters flow placidly and takes his music into several streams. In 1998 he took over as Director of the Europlane Orchestra. The impetus behind the Orchestra is to "provide an analysis, a study and a summary of the terms of the jazz tradition in a European key with reference to the future development of jazz." The Orchestra pays attention to "original arrangements and compositions, echoing the European jazz and folk tradition" and in extending that vision has musicians from several countries including Poland, Belgium and even the USA play along. This gives Magris some more of the expression he seeks; he finds the rest in hip-hop and rap.

When the last muse came calling, Magris took to the Hammond organ and pulled in Marco Castelli on saxophones, Paolo Prizzon on drums, Brazilian Edu Hebling on bass and Italo-American rapper Max "M-bass-adò" Marzio to form DMA Urban Jazz Funk. They took their music on the road and recorded a self-titled album. The band turned out to be the springboard for another, Alfabeats Nu Jazz which merged new jazz, new age music and hip-hop.

There was a road that had led him to explore the sounds of hip-hop. He loved organ jazz and listened to Charles Earland, John Patton, Larry Young, Eddy Louiss, Jack McDuff, Jimmy Smith and Richard Groove Holmes among others. "I bought a Hammond organ and I decided to use it with an acid jazz group. Then, starting from acid jazz (I played it just for fun) I got more and more involved in rap, hip-hop and urban jazz. I put aside the organ and I started to compose some music in that kind of direction, playing my solos on acoustic piano. I still like to keep this interest in mixing my jazz roots with hip-hop rhythms and urban music approaches. I met some good musicians in Italy on that style, among them rapper Max "M-bass-ado'" Marzio. Things are going on for me in this musical direction and why not? Miles Davis taught jazz musicians that it's important to follow the present times and to try to renew our ideas from time to time. Otherwise there is the risk of losing many possibilities to get young musicians and young audience involved in the essence of jazz." That is as good an argument as any.

With the many influences creeping not only into his music but into jazz at large, Magris has a context for the way jazz is evolving. "I think that in the seventies jazz-rock had no chances to develop because musicians were much different than now. At that time jazz musicians and rock musicians had a totally different background. Nowadays, thanks to the many jazz schools (I say this even if I'm a self taught jazz musician) the quality and professional capability of musicians is much higher and also they are totally open-minded about playing different styles of music and even combine them. The result is that a professional bassist, today can easily play jazz, rock, pop, fusion at the best (I've in mind John Patitucci, as a top for example). So, it's much easier to collaborate and to get different inspirations among musicians, today. And the music schools can be an excellent starting point. For the rest it's important to have a certain musical and personal culture (hard to express today) to influence choices. I think that we'll have more and more of a high standard of musicians and jazz musicians all around the world but, as ever, only a few of them will be able to find new ways of inspiration. Certainly the jazz tradition will remain the natural background, but there will be new possibilities of expression through digital musical. I also think that European musicians might have some interesting things to add."

Magris composes the music for all his bands. Does he have a problem keeping the constitution and the needs of each in focus when writing? "Honestly, I simply sit at the piano and try to develop some musical ideas that sometimes suddenly pop up in my mind. Of course I'm influenced by my daily life, by the kind of music I've listened to in the past and I'm listening to now. I just like to write the music on sheets of paper and try it at rehearsals. I do not program music nor do I use a computer. I try to imagine how the new ideas could sound and which combination of instruments, musicians and group could be the best. I cannot keep my writing separate from band to band. Sometimes it happens that I play a piece with my straight jazz group that I'd originally composed for my hip-hop project and vice versa."

His writing seems to have dovetailed towards the Europlane Orchestra from whom there will be three albums in the near future. In 2005 come Check In featuring Tony Lakatos on saxophone and Il Bello Del Jazz featuring Herb Geller on saxophone, while Current Views featuring Philip Catherine on guitar is slotted for 2006. Having listened to some of his earlier work, one can only wait with eager anticipation for the new music.

Visit Roberto Magris and the Europlane Orchestra on the web.