Greg Abate with the Tim Ray Trio: Road to Forever 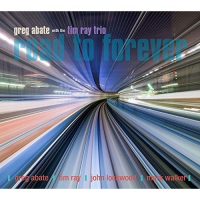 Greg Abate's name isn't often broached when debating the merits of contemporary jazz saxophonists. It should be. While perhaps best known for his work on alto, the Rhode Island-based swinger proves on Road to Forever, recorded with his regular working trio, not only that his talents on soprano, tenor sax and flute are exemplary, but that he is equally adept as a composer / arranger.

Each of the ten songs on Road to Forever was written and composed by Abate, and they are invariably engaging and worth hearing many more times than once, as are the stellar interpretations by Abate and his outstanding trio, ably supervised by pianist Tim Ray and firmly anchored by bassist John Lockwood and drummer Mark Walker. Abate's balladic "Farewell Phil Woods" (on which he plays alto) is a lustrous masterwork, but no more so than his dynamic riffs on the standards "Softly as in a Morning Sunrise" ("Take the Crowell Train"), "Green Dolphin Street" ("Red Fish Blvd") or Charlie Parker's bop evergreen "Confirmation" ("Mr. Parker"). One minor correction: Abate plays tenor and flute on "Red Fish Blvd," not alto and flute, as indicated in the jacket.

No matter what instrument he is playing, Abate is clearly at the top of his game, soloing with perception and assurance in front of a trio that pushes him every step of the way. Ray, a sharp and responsive accompanist, is an engaging improviser in his own right (on acoustic or electric piano), while Lockwood and Walker make the most of every opportunity to lay bare their singular point of view. Even so, Abate is clearly the captain of this ship, showing with every irrepressible line and phrase why he should indeed be counted among the world's foremost contemporary jazz saxophonists. For those who harbor any doubts about that, Road to Forever should lay them to rest once and for all. Although 2017 is in its infancy as this is being written, high marks to Abate and his trio for producing one of the year's more impressive albums to date.